Five Popular Versions of Poker That You Should Play 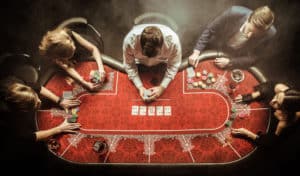 Poker is one of the oldest and most established gambling games around.  With its origins tracing back to renaissance Europe, the game has established itself as a firm favourite of punters.  Over time, numerous versions of poker emerged, making the players spoilt for choice when it comes to the selection of their favourite gambling style.

If you are reading this, you probably know the basics of poker.  But even if you are a pro, this article can help you find the type of poker that will suit you best.  Be it a fast-paced game or a version that uses a minimal number of cards, we all have our preferred ways of drawing a card.

Here is our selection of popular versions of poker that we think you should try out:

In Omaha Poker, players are assigned four-hole cards, instead of two, and are permitted to use only two cards from their hand.  The game has five community cards, with turn, flop and river.

Omaha Poker plays out in a limit or pot-limit format, with typical variations being Omaha-8-or-Better and Omaha High.  Omaha-8-or-Better splits the pot between the best low hand and the best hand, while Omaha High awards the jackpot to the player with the best high hand.  Omaha Poker is a fast-action game, where position tends to be crucial when looking at combinations.

Texas Hold’Em Poker is the most popular version of poker. It’s also probably the best starting point should you wish to learn how to play poker professionally, since all marquee tournaments, such as WPT and EPT, use this version.

Each player gets dealt two-hole cards from which to create the best five-card hand.  The gameplay moves clockwise, with the two players to the left of the dealer required to post a big and small blind to commence the betting.

Five community cards are located in the middle on the river, turn and flop, with players expected to create best five-card combinations from their seven cards.

Some call Seven-Card Stud Poker the hipster poker, and this version of the game was popular before Texas Hold’Em Poker became fashionable.  The game is played with two to eight players and does not use any community or flop cards.  The game commences with two cards face down (hole cards) and a third faceup card (door card).

The players get dealt four faceup and three facedown cards and need to choose the best five-card combination.  Seven-Card Stud Poker is usually played as a limit game and relies on estimates of odds garnered from observing the opponents’ moves.

Open-Faced Chinese Poker is a new and exciting form of the game that evolved from close-faced Chinese poker in 2011.  The players are prompted to draw cards from a single deck and attempt to create the best possible hand.

Instead of rounds, the players play for points.  Following the completion of all card-replacement rounds, players would arrange 13 cards into three hands: the bottom, middle and top.  The bottom and middle are five-card hands while the top is made up of only three cards and is scored as a regular hand.

If you are looking for an unconventional and advanced poker game, then 2-7 Triple Draw Poker is the game for you.  The goal of the game is to get the lowest five-card hand possible in a four-round match, with three draws per game.

Each round, the players choose to discard up to five cards, with the dealer replacing these accordingly.  Deuces play low, and aces play high, with the flushes and straights playing against you.  Ultimately, the best combination is 2-3-4-5-7 with no flush.  2-7 Triple Draw Poker uses the same betting format as Texas Hold’Em Poker.

Hope you’ve gathered enough information to select your preferred poker type and take a chance.  Remember, the best poker is the one that you spend the most time mastering.  And, by conquering the game, you could win some of the top tournaments around.