The Most Common Roulette Myths Debunked 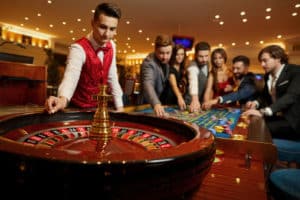 Although the role of the ball inside the roulette wheel is entirely arbitrary and impossible to influence, many gamblers have entrenched beliefs about roulette myths that are as peculiar as they sound.

The roulette wheel has always been perceived as being glamourous, whether it’s located in a land-based casino or an online casino website.  With roulette featuring prominently in films and on TV, certain superstitions and fallacies have emerged over time, that influenced myths about this game.  Expectedly, many rookie gamblers often fall into these make-believe traps when deciding which strategy to apply when they play.

Contrary to these beliefs, roulette is a game of pure chance and odds, and grasping these two concepts will ensure that you have a successful gambling experience each time.

To spur you on along your successful roulette journey, we have identified five common roulette myths that need to be debunked:

1. It’s Possible to Hedge the Board

Some gamblers get too confident after experimenting with a few different types of bets on offer.  This is most apparent when a gambler attempts to hedge positions by trying out several different bets per spin.  Although we won’t disagree that this strategy might occasionally work on one or two spins, in the long run, it remains impossible to reduce the roulette house edge.

No matter what, the house edge is built into each spin, so multiple bets at once will not improve your long-term winning odds.  Also, be aware that a wrong hedging strategy can backfire and lose you more money quicker unless you are very lucky.

2. Past Performance is Indicative of Future Probability

The logic might tell you that if a specific number or colour sequence appeared previously, that it would carry through again.  This type of reasoning can cloud your better judgement and force you to make rash decisions.

Ultimately, every time a roulette wheel gets spun, each number or colour stands the same chance of coming up again, regardless of past performance.  So, veer clear of patterns, since they are utterly meaningless in a random game like roulette.

3. Always Stick to One Type of Bet

Many gamblers make the mistake of thinking that if one type of betting worked for them once, they should stick to it going forward.  In roulette, there are many betting options and, frankly, neither is better than the other.

So, feel free to experiment, since it’s in your interest to use all the betting styles available to you, rather than to pursue a single type of bet rigidly.  Once again, try to avoid creating patterns and deducting imaginary “winning formulas” out of these, since such methodologies carry no weight in random games.

4. Winning Big on Roulette is Impossible

This is probably one of the most nonsensical presumptions that exists about roulette.  While you do have to factor in the usual variables such as the house edge and probabilities, striking it mega-rich remains entirely possible.

Whenever you play, you have a one in 37 chance of hitting the 36x multiplier on your wager. While you probably won’t win millions on a single spin unless you are a very lucky high roller, the chances of winning a sizeable prize are always there.

5. Martingale is a Great Strategy

One of the classic gambler fallacies is the belief in the effectiveness of the Martingale betting strategy.  This strategy states that if you lose a wager, double your next bet to compensate for the lost money.  This would be ok if you are guaranteed a win the next time around.  However, a losing streak of four or five rounds will land you in an unenviable situation where you will be chasing losses.

Choosing one number out of the 37 available doesn’t mean it will appear after 37 spins.  In fact, it might take far longer than that, by which time you might be left bankrupt.  Ultimately, there is no linear logic or hit guarantees when it comes to numbers, so try to avoid quick fixes.

Winning is not always easy, but by not falling for myths, you have a better chance of scoring some cash.  So, steer away from old wife’s tales and use your common sense and logic whenever you take a seat at the roulette table.  Good luck!