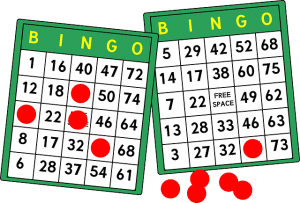 Online bingo is often seen as solely a game of luck, even though specific theories of probability can enhance your winning chances.

While we often associate bingo with elderly players flocking to a church hall on a Friday evening for some socialising and fun, this game is all but slow-paced.  In fact, many in-house casinos today have large bingo lounges where groups of players gather each day to try out their luck with this entertaining and interactive game.

However, contrary to popular belief, winning at bingo is not all about luck.  There are a few methods that players can use to swing the odds in their favour and maintain a winning streak over an extended period.

Granville Techniques to Winning at Bingo

Joseph Grenville was an American finance and investment specialist, who is most famous for developing the concept of on-balance volume (OBV).  Besides his ground-breaking research relating to financial markets, Granville also enjoyed the game of bingo. Subsequently, he directed a large part of his analytical research towards the blueprinting of this game.  His discoveries yielded sound strategies that can enhance your chances of winning.

Granville’s strategies are relatively simple and are methodically laid out in a combined step-by-step approach.  They rely on the premise that each new game of bingo follows defined patterns.  By making use of these patterns, players can more easily swing the game in their favour.

The focal point of any bingo win is the card selection.  Granville established the crucial relationship that exists between the master board and the winning bingo numbers.  Granville further described how to use these premises to select a higher number of winning cards, when popular methods used by players were not yielding the desired results.

Most bingo players assume that by playing several cards, they are automatically increasing their chances of winning.  It might sound logical, but according to Granville, the actual way to increase your winning chances is to play with fewer cards.

We tend to embark on a game of bingo with the assumption that our chances of winning rely purely on luck.  Thus, predicting which ball will be called up next is assumed impossible.  However, making use of mathematical probability, Granville proved that there could be a strategy involved.

Balls that are drawn display specific patterns, demonstrated in the following randomness tests:

The last point is known as the Tippett Theory and was devised by the British statistician L.H.C. Tippett.  Going from 1 to 75, the average number on the bingo board would be 38. The first few numbers that are called in a bingo game may or may not average 38, but it’s inevitable that, as the game progresses, the average of called numbers will gradually approach 38. As a result, when bingo numbers are called, the entire game, consisting of 12 calls, represents a sampling of the whole population. The larger the sample, the more likely the numbers will average 38.

When you play bingo next, keep a close eye on the first ten numbers drawn.  Almost always, the ten numbers called will each have a different digit ending.  Going back to Granville’s observations and knowing that there should be an even amount of numbers ending in ones, twos, threes, fours, etc., the laws governing a sample drawing of ten balls out of 75 would show a tendency toward each digit ending being represented.

For example, if the first number called is 42, then the probability of the next number not ending in two is increased. This is because there are no more balls left with endings other than two than there are balls left that end in two.  This theory can then be applied progressively for each new draw, eliminating combinations that are less likely to come up.

Contrary to popular belief, the game of bingo can be mapped out using statistical equations.  By making use of different randomness tests, you can better your chances of winning by eliminating less likely outcomes.  This, when applied over an extended period, can considerably boost your overall chances of winning.