Rummy for Beginners and Rules of the Game 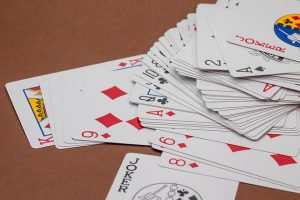 Rummy falls into the category of card games where the aim is to continually improve the hand that you get dealt, in order to win each round.

The origin of rummy cannot be pinpointed with certainty, although it is widely believed that the roots of the game lie in the ancient Chinese game of kahnu.   The rules of kahnu were laid out in a guidebook authorised by emperor Kao Tsung in 1130 AD, as a guide to his subjects.

Kanu, in turn, has had a strong influence on the development of the popular Mexican game conquian, which is today regarded by most games scholars as the ancestral blueprint for all modern rummy games. The rummy principle of discarding and drawing with a view to melding appears in Chinese card games as early as the 18th century.

The Objectives of a Rummy Game

The primary objective of rummy is to meld, or amalgamate your cards according to two combination types:

Some examples of winning card combinations:

The first player who creates combinations from his entire hand, with one remaining card to discard, is the winner.

How to Play Rummy?

Here are the four easy steps to playing rummy:

Here are some additional tips to better your chances of winning:

You can also play rummy by making use of joker cards.  The joker substitutes any missing card that you might need within a set.  So, for example, if a combination that includes a joker standing in for the queen of hearts is placed on the table, the next player can put in the queen of hearts and redeploy the joker for use elsewhere.

Rummy is a straightforward game to grasp and can be enjoyed by all age groups.  It is a social game that can be played in a larger group or a more intimate one-on-one setup.  Give it a shot and see where your luck takes you.