Does Playing Alongside Bad Blackjack Players Decrease Your Chances of Winning? 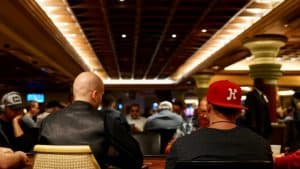 Gambling is full of beliefs and superstitions, with one of the most common theories being the notion that when you are sitting next to bad blackjack players, it decreases your chances of winning.

There is a persistent assumption that has been going around the blackjack tables for generations.  This hypothesis states that the decisions made by your fellow players directly impact your chances of success or failure.

This school of thought believes that should a player before you make a bad decision, this will directly decrease your winning odds.  Should one player stray away from the fundamental strategy of the gameplay, it will generate a ripple effect on the remaining players’ chances.

Instinctively, a losing player will, more often than not, blame their loss by pointing the finger in the direction of the player on their right. “If they had a bit of skill and stayed, I would’ve hit 21”, they might exclaim. “Why did that nitwit hit on 15, with the dealer showing a four?!”.

In some instances, the decisions made by a player who precedes yours might leave you dumbfounded.  But what is the actual probability that the action of the previous player can impact your hand?  If you are the one who sticks to your winning strategy and is oblivious to the capers of your tablemates, would you nonetheless be doomed to lose?

A Cause and an Effect

The best way to get to the bottom of this question is to look at an example. Let’s say you are playing blackjack at one of your favourite online casinos in Canada.  The dealer shows a six, while you have an 11 and the player next to you has a 16.  With only five cards (ace through five) that can improve their hand and another eight cards that can potentially push them over the limit of 21, the best move for them would be to stand.

This is especially true since the dealer is showing a six, a faceup card that comes with a high probability of an eventual bust.  Still, in this specific scenario, your co-player taps the felt and draws a jack.  And your jack at that, you might exclaim!  He naturally loses, you end up drawing a seven, only to lose to a dealer’s 19.  Rightfully, you’re a tad bit annoyed with the player next to you.

It’s undebatable that the decisions of adjacent players can impact your game directly.  Although, in the abovementioned scenario, it would have been just as likely that the player ahead of you drew a seven, with the next card being an ace, awarding you a blackjack.

Does Poor Play Hurt Everyone?

There is no conclusive evidence that one player’s lousy performance causes other players to lose.  Of course, you will come across anecdotes, some of which might be true.  Even so, the way other players’ decisions impact your hand is thoroughly random.

Occasionally, an unskilled player might end up costing you the face card you might have been waiting for.  But, more often than not, blind plays actually save the table (including yourself).  So, even though unmindful players can make wrong moves, empirical evidence suggests that lousy play can equally bust the dealer, just as much as it can cause other players to lose.

A theoretically “bad” decision by a player before you will undoubtedly impact your odds, but the same hold true for a “good” decision that they might make.  And, whether the outcome of that move is negative or positive remains completely random.  As a rule of thumb, never modify your approach to accommodate the long-term effect of a poor decision made by someone else.

Your best chance of scoring a win at blackjack is to make use of a robust strategy and staying course with it, no matter how many times you believe that your neighbouring player snatched away your face card.  Alternatively, choose a variation of blackjack that you feel most comfortable with, to boost your chances of winning.