When one thinks of casinos and card games, probably the most vivid image that comes to mind is that of the game of poker.  And rightfully so, since poker has grown to become the most popular casino card game of all time.  The game itself is a combination of skill, strategy and luck, with many poker experts making the game their profession, based on the high value of takings that can be won. 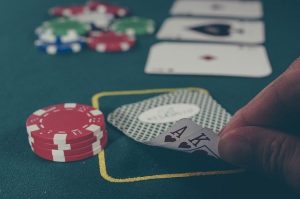 Poker is an all-American game, having been first developed in New England at the beginning of the 19th century.  While some gambling historians have linked modern poker to the ancient Persian game of as-nas, others have challenged this notion by elaborating that it is wholly a product of the new world.  Either way, by 1970s, the popularity of poker had skyrocketed, with modern casino poker tournaments like the World Series of Poker commencing in 1970.

Different poker variations can be played with either a high or a low hand.  The four fundamental poker variants are:

How to Win a Hand in Poker

There are many ways that a winning hand can be dealt in poker.  In certain situations, every player around a table might have a combination that can bring a win.  In such a case, the winning combinations are ranked amongst the players, to see who has the strongest one.  These hands include (from the lowest to the highest-ranking):

Playing poker online does not differ that much from an in-house casino experience.  To start, you can select a more straightforward form of the game, such as the three-card poker, and place your bets before the cards get dealt.  Once you have all your cards, you can decide whether to place another bet, raise or fold.  In such a game, you will either play alone against a dealer, or you will have your hand compared with the table.

Should you choose to play the Texas Hold’em variation of poker, you are required to place an initial bet, after which you will be dealt two cards.  Following this, the initial community card, which is called a flop, will be dealt.  In the instance that you carry on calling or raising, a second community card, called the river, is dealt.  Should a third raise or call take place, the last community card, known as the turn, is dealt.  After this, the dealer’s two facedown cards are turned around, and the winner is determined.

Although not the most complex of games, poker does depend a lot on strategising and calling bluffs.  Monitoring your opponent’s demeanour could be just as important as what cards you get dealt.  In the end, both your skill and your stint of luck will combine to determine the overall winner.

For more gambling tips and tricks, be sure to check out our online casino advice and news section.