Beginners Guide to the Card Game of Bridge 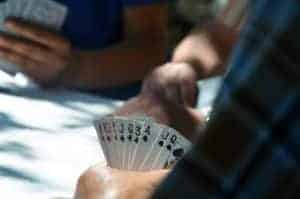 Some have dubbed bridge the greatest card game of all time, often becoming a lifelong companion to those gamblers who enjoy playing this game.

The card game of bridge comes from the family of trick-taking games, with its roots dating back to 16th century France and Italy.  The format of the first modern game of bridge, auction bridge, came about during the later 19th century and derived its name from the Russian word birich, which means an announcer or a diplomatic clerk.

In 1925, Harold Stirling Vanderbilt modified the scoring system of auction bridge, to give the game its current format.  The most significant change implemented by him was that only the contracted tricks were scored under the line for a game or slam bonus, making bidding far more challenging and exciting.

The Four Phases of the Bridge Hand

Each bridge hand is divided into four phases, which always occur in the following order:

Anyone in the group shuffles the cards, and each player picks one and places it face-up in front of them.  The highest card gets to deal, who then shuffles the cards and passes them to the player on their right to cut them.  Cards are then dealt one at a time, moving clockwise from the left of the dealer, until each player has 13 cards.

Since each player has got 13 cards, 13 tricks are up for grabs, with players bidding for the number of tricks they can take.  The dealer starts the bidding, and then moves clockwise, from their left side.  Each player can either bid or pass on their turn.  The smallest bid is for seven tricks, while the largest one covers all 13.  The bidding continues until three players in a row say pass following a bid made.

The player who buys the bided contract is called the declarer and plays the hand.  The player who is sitting to the left of the declarer places the first card, or the opening lead, face-up on the table.  The next player, called the dummy, places their cards face-up on the table in four vertical rows, representing each suit, and bows out of action, leaving three people left in the game.

This process continues for all 13 tricks, following the suit of the card that has been led.  Should a player not have a card in the required suit, they can discard any card from an alternative suite that’s not needed.  After playing 13 tricks, each team counts up the number of tricks that they have won.

Following the counting of the tricks, the dealer’s team will be informed whether they took the number of tricks that they have bid, after which the score is registered.  After that, the deal shifts in a clockwise manner, with the person sitting to the left of the previous round’s dealer dealing the next hand.

Bridge Etiquette: The Dos and the Don’ts

Here are some tips to follow to keep your bidding in line with the expectations:

So, there you have it.  Bridge is not only one of the more straightforward card games to master, but it is also a great example of how to use teamwork to win.  Hope you have fun and win every time!