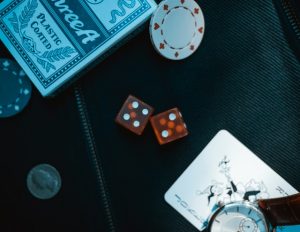 The history of Caribbean stud poker is not that well documented.  What’s certain is that the game first emerged in the early 1980s in the US, from where it expanded globally.

The actual mastermind of the game is believed to be an author of poker-related literature, David Sklansky, who first discussed the game in 1982. However, his version of gameplay did not precisely correspond to the contemporary form of Caribbean stud poker.  Regretfully for Sklansky, he never patented his version of the game and probably missed out on some juicy royalties.

How is Caribbean Stud Poker Played?

Caribbean stud poker table resembles a blackjack table, with seven player seats, overseen by a dealer who uses a 52-card deck.  Each player has a marked betting area in front of him, labelled either ante or bet.

The ante represents a mandatory bet with a CA$5 minimum.  After everyone places the ante bet, the dealer will draw a set of five cards and place a set in front of each player and himself.

Here, the player has two options, based on how good their hand is.  One option is to fold and lose the ante, by returning the cards to the dealer.  The alternative option is to play, by placing a wager in a corresponding spot on the table.  Here, the betted amount needs to be double that of the ante.

How Does a Caribbean Stud Poker Hand Play Out?

Following the drawing of the cards, two outcomes are possible:

The ante always gets paid off at even money, although the bet pays off based on the strength of the hand in accordance with the game’s paytable:

The progressive jackpot pays in the following order:

The house edge in Caribbean stud poker is over 5% since to stay in a hand, you will need to put up three times the size of the ante.  Since the dealer won’t qualify about 45% of the time, you will only get your ante back, and the bet will be treated as a push.

Remember, bluffing is an ineffective strategy in this game since the dealer can’t fold, so your only hope would be for the dealer not qualifying.

Here are some hints to increase your chances:

Caribbean stud poker can be loads of fun, since the gameplay is relatively slow-paced, and the strategy is straightforward.  Keep in mind that having an edge doesn’t mean that much when dealing with progressive jackpots.  Hope you have fun and enjoy the game!