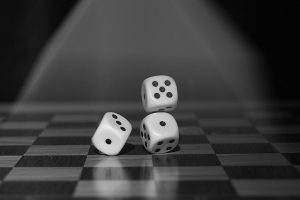 Sic-bo is a popular live online casino table game that originated in China and has taken the online gambling industry by storm.

Like many popular contemporary casino games, the game of sic-bo originated in ancient China during the first millennium before Christ.  The name of the game translates simply into “precious dice” and refers to the three dices around which the gameplay revolves.

Following the outlawing of gambling in mainland China by the communist government in 1949, sic-bo gambling houses migrated to the then Portuguese colony of Macau, where the game continued to flourish.  After the transfer of Macau back to China in 1999, the specially administered territory remains the only place in China where locals can legally gamble and play sic-bo.  From here, the game gained global popularity and is now offered by many online casinos worldwide.

Like any casino game, sic-bo has got a set of terms that you will need to familiarise yourself with before commencing with the game:

Clear – this term is used to cancel your bet, after which your chips are returned to you

How to Play Sic-Bo?

As one of the lesser-known casino games, many players might approach sic-bo with a dose of apprehension.  The objective of the game somewhat resembles craps, with the players betting on what they expect the combined value of the three dice to be.  Betting takes place before the dice are thrown, after which the combined value is tallied, and the winners paid out.

The only variations of the gaming strategy revolve around different types of betting techniques. Here are some of the key alternatives of sic-bo betting:

Total betting is the most popular wagering style and involves betting on the total of all three dice, which can range from four to 17.  As for numbers three and 18, these are covered by bets on triple three and six.  The eventuality of each score landing is shown on the table’s betting squares.

Here, you can bet on small numbers between four and ten or big numbers between 11 and 17.  However, if either the opposite or a triple appears, the players lose the bet.

Combination bet provides an opportunity for a player to bet on any two specific numbers featured on the dice.  As an example, a player might select two and five as their bet.  If the numbers two, three and five show up, the player will then win.

This is the simplest form of betting, whereby a player bets that a single particular number will appear on the next roll.

By placing a double bet, the player is betting that a selected pair of numbers will appear the next time the dice are cast.  For example, if a player bets on a double three and the dice rolls a three, four and another three, they will win because it includes a pair.

By placing a triple bet, the player is wagering on all three dice showing the same number.  Players are free to bet on any triple, from one to six.  Although it’s the bet with best returns, the chances of getting a triple are pretty slim.

While sic-bo might appear as an exotic game that would take time to master, the truth is that the gameplay is relatively simple.  With all betting revolving around the outcome of three dices being thrown, the time taken to master this game should be minimal.  A few rounds of practice are all that you will need to be able to call yourself a sic-bo specialist.  Good luck and break a leg!