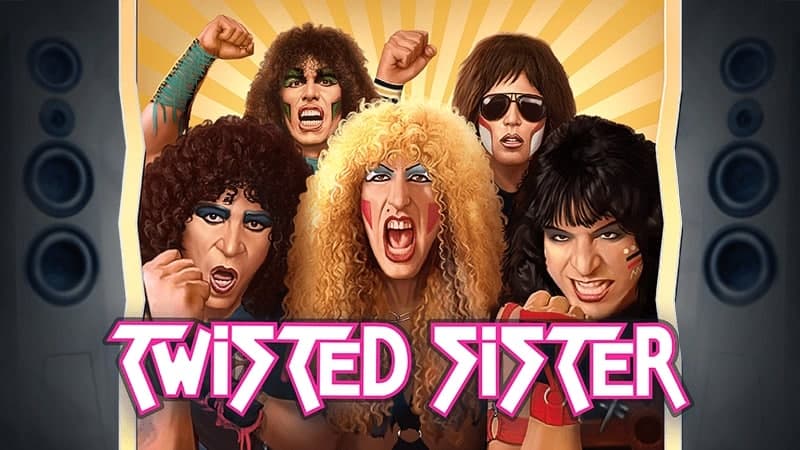 Are you going to take it? If you are a hard rock fan we know that you are certainly NOT “gonna take it”! Twisted Sister has arrived on the reels and the takeover has begun. This game was inspired by the heavy metal band Twisted Sister, that was formed in 1972 and led by Dee Snider. Twisted Sister is a medium volatility online slots game that is brought to you by Play’n GO and is played on 6 reels, with 1 payline. If you are in the market for a legitimate Canadian slots game, this is your place to rock.

Before taking the lead, you shall have to place your bet in order to get those reels spinning. Should you prefer to support your band by spectating, simply select the Autospin Function, sit back, relax (if you can) and appreciate. We understand that the die-hard fan will prefer a faster pace and for this reason, the Turbo Spin Function is available

Should the game round be disrupted, all information and placed bets will be stored until the game is re-opened (the unfinished round may be continued from the point of interruption). Unresolved bets placed and remaining undecided upon (in incomplete games) will become void after 90 days. Malfunction voids all pays and plays. Twisted Sister is a 6 X 6 cascading video slots game.

Wins are achieved by obtaining 5 or more symbols in clusters (which are then removed so that new symbols may fill the grid). Cascades will continue until no more wins are created. During non-winning spins there is a chance of 2 Wild Scatter Symbols (Angry Dads) being randomly added to the playing field.

The Wild Symbol is represented by its logo and will substitute all other symbols except for the Wild Scatter Symbol.

The angry dad icon acts as the Scatter Symbol. The Wild Scatter Symbol will substitute all other symbols in this game, barring the Wild Symbol.

ANGRY DADS are WILD SCATTERS and are collected in the ANGER METER should they form part of a winning combination (with other symbols).

We’re Not Gonna Take It Feature

GUITAR charges are counted during WE’RE NOT GONNA TAKE IT and BAND FEATURES will play out normally. The MEGA BAND symbol does not add any charges to the GUITAR CHARGE METER.

MEGA BAND and ANGRY DAD Symbols will not drop down on additional cascades during this feature.

Enjoy playing this heavy metal themed slots game that is proudly hosted by Jonny Jackpot Casino. All new players will receive a Welcome Bonus of up to CA$1,000, along with 100 Bonus Spins and are spoilt for choice, with over 1,500 games to choose from.