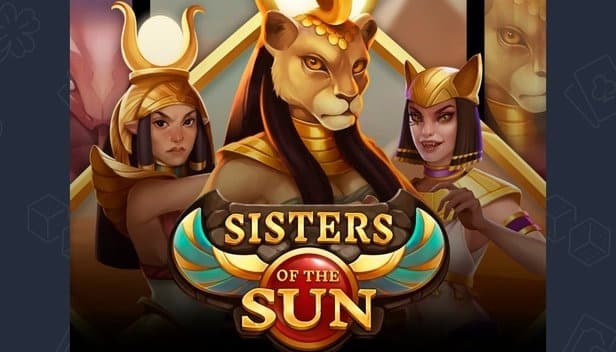 Sisters of the Sun Review

Travel back to the glorious days of ancient Egypt where the Sun God Ra bestowed magical powers upon the goddesses Sekhmet, Hathor and Bastet. You need look no further than this sisterhood for the enchanted features that host some glorious player rewards. Sisters of the Sun is a genuine online video slots game that is brought to you by Play’n GO and is played on 5 reels with cluster pays. This game answers to the call of the charmed online gamer who is after aesthetics and authenticity in a Canadian slot.

If you agree that you just have to be part of this magic, it is suggested that you place your bet sooner than later, dear gamer. Observers are welcome and are encouraged to opt for the Autoplay Function to appreciate the beauty of this game at ease. The hasty gamer is urged to make use of the Turbo Spin Function.

The Goddess Power Feature is triggered at random on non-winning spins. A unique ability is performed in order to assist in the creation of a win, which depends upon the active goddess shown on-screen at the time.

The game will commence with a randomly selected goddess (with the order of goddesses fixed to: Goddess Sekhmet – Goddess Hathor – Goddess Bastet).

The Sisterhood Feature will trigger with the appearance of 1 Scatter Symbol:

Completely clearing the grid of symbols during this free round will only activate the Free Spins and no instant prize will be awarded.

The active goddess will return to the goddess on-screen prior to the commencement of the Sisterhood Feature.

Before the Free Spins Feature begins, one of the three goddesses are chosen:

The Win Multiplier will be carried over from the Sisterhood Feature and will only reset once this feature has culminated.

During the Free Spins Feature the number of the Eye of Ra locations will increase from 5 to 10 and the selected Goddess Power will trigger on every non-winning spin.

The Sisterhood Feature may not be activated.

The Scatter Symbol will be used to award additional spins during this feature:

The maximum number of spins is set at 150.

Completely clearing the grid of symbols (except during the Sisterhood Feature) will award the gamer with an instant prize.

Enjoy playing this Egyptian themed slots game with Jackpot Village Casino – one of the greatest new online casinos in Canada! All new players will receive a Welcome Bonus, along with super (and exclusive) promotional offers.