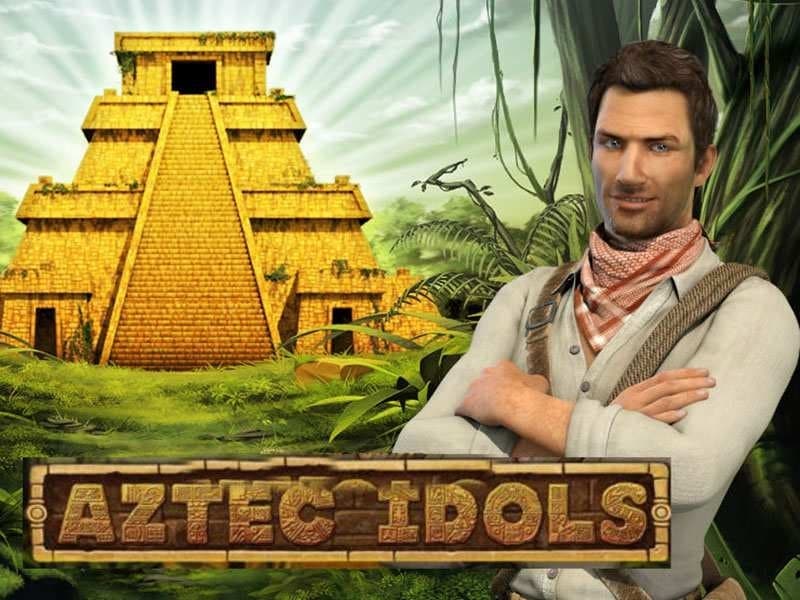 If you cannot see eye to eye in 13th century Mexico, best you prepare to meet toe to toe with the Aztecs (the descendants of the modern-day Nahua). Rich Wilde eagerly waits to accompany you on a rough cultural adventure that will enlighten the mind as you strive for monetary gain. Aztec Idols is a real online video slots game that is brought to you by Play’n GO and is played on 5 reels, with 15 paylines. If you are in the market for a genuine Canadian slots game, then it is suggested that you let the hunt begin, as wise players may win up to 150 times their total bet!

To be part of this excitement you shall have to place your bet in order to get those reels spinning. Should you be of the mind to spectate this game, simply select the Autospin Function, sit back and let life flow as the Aztec idols appear for action upon the reels. The faster paced gamer is encouraged to engage the Turbo Spin Function for a speedier experience.

Should the game round be disrupted, all game information and placed bets will be stored until it is re-opened. The unfinished round may be completed from the point of interruption. Unresolved bets (placed but remaining undecided upon in incomplete games) will become void after 90 days. Malfunction voids all pays and plays.

Payline wins will occur on a number of selected paylines, in accordance to the information that is displayed in both the paytable and the game rules. When winning on multiple paylines in a single game round, all winnings will be summed together. All winning combinations will paid out at the end of a game round.

Rich Wilde (himself) represents the Wild Symbol which will substitute all other symbols except for the Scatter and Bonus Symbols.

The golden pyramid acts as the Bonus Symbol.

3 Bonus Symbols (appearing anywhere on the paylines) will trigger the Pick-the-Idols Bonus Game. During this feature the player is to pick a golden idol. Each idol holds an awarded amount. Should a specific idol be booby-trapped however, a cloud of poisonous gas will be released, and the feature will end.

The sunstone represents the Scatter Symbol.

3 Scatter Symbols appearing (anywhere) on the reels will trigger the Free Spins Feature, during which, a sunstone will spin and stop, to then randomly select a symbol on the reel to act as an additional Scatter Symbol (which bestows a number of Free Spins). The extra Scatter Symbol will pay in accordance to the original symbol’s paytable. No supplementary Free Spins will then be awarded, and the Bonus Game cannot be triggered during this feature.

The Bonus Symbol only appears on reels 3, 4 and 5 and the Scatter Symbol is confined to reels 1, 3 and 5. All symbols, barring the Wild, Bonus and Scatter Symbols may be selected to play as additional Scatter Symbols during the Free Spin Feature (only).

During this feature, the player may attempt to multiply a prize. The GAMBLE button is to be selected after a win in order to start the round. The objective is for the player to correctly guess the color or suit of a face-down card – by clicking the appropriate button. Should the colour be correctly predicted, the prize won will be doubled and should the suit be accurately foreseen, the prize will be quadrupled. The Gamble Feature may be played up to 5 times in succession (and is limited to 2500 coins).

This game also features an optional Gamble Round that provides the gamer with the opportunity of multiplying the total prize on any spin during the main gameplay mode, by correctly guessing the color or suit of a hidden card and this feature may also be played up to 5 times in succession.

Enjoy playing this compelling game of adventure with Slotnite Casino. All new patrons will receive a Welcome Bonus of CA$1,250, along with 200 Free Spins and will be spoilt for choice, with over 1,200 games to choose from. Slotnite Casino runs generous, ongoing promotions, simply something you can not miss out on!