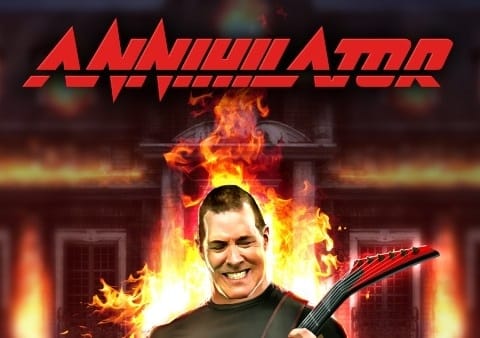 Set the world on fire with Annihilator! This game owes its provenance to the thrash metal band, Annihilator – their legendary guitarist Jeff Waters, takes control of these reels. The player will enjoy a number of features in this game, whilst appreciating some of the band’s greatest hits. Strike that lucky note and get rewarded with riches to keep on playing with this band. Annihilator is an online video slots game that is brought to you by Play’n GO and is played on 5 reels, with 10 paylines. If you are in the market for a genuine online Canadian slots game, search no further, as this is the time and place to rock!

To step onto the stage you will need to place your bet, in order to get those reels spinning. If you wish, you may spectate this band and enjoy the game proceedings by selecting the Autoplay Function. If you are determined to thrash through this game at optimum speed, you are encouraged to opt for the Turbo Spin Function.

Annihilator is a 5-reel video slots machine with 10 fixed paylines. A selection of hit songs from the band Annihilator, are available via the playlist.

Jeff Waters himself acts as the Wild Symbol, which substitutes all other symbols, except for the Scatter and Bonus Symbols.

The In Command Feature is randomly triggered during the base game. When this feature is activated, Wild Symbols appearing on the reels will expand and fully occupy the respective reel/s (substituting all other symbols, barring the Scatter and Bonus Symbols).

Should the spin not yield a win or feature a trigger, 1 re-spin will be awarded. Previously expanded Wild Symbols will remain in place and the other available reels will spin (in order to provide new symbols). Additional re-spins will be awarded until a winning combination is achieved or a feature is activated. This mode is not active during the Free Spins Feature.

The Fun Palace Feature will be triggered by 3 Bonus Symbols. The player is to pick doll symbols in order to reveal hidden prizes – until a final prize is selected.

All revealed cash prizes (attached to a Multiplier of either x 1, x 2, x 3 or x 5 the total bet) will be collected and the player may select another doll.

This feature will also culminate when the gamer locates a Scatter Symbol, which will immediately activate the ‘Set the World on Fire’ Feature.

Set the World on Fire Feature

The Set the World on Fire Feature is triggered when either 3 Scatter Symbols have landed  or via the ‘Fun Palace’ Feature.

Enjoy playing this metal band themed slots game, proudly hosted by CasiGo Casino. All new players will receive a Welcome Bonus of CA$1,100, as well as 375 Free Spins and may choose from over 1,200 games to entertain themselves with.