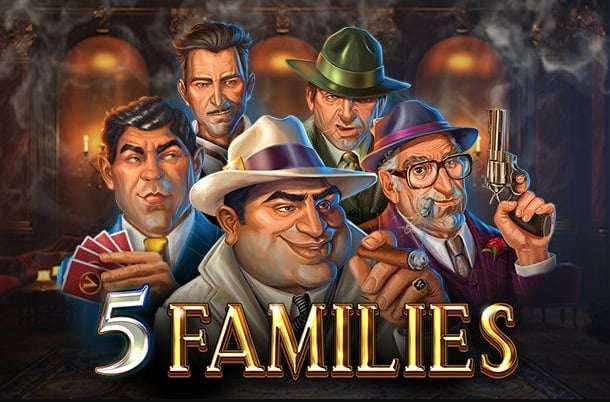 “Show your face in the hood, Capo dei Capi; you know that time is money and money is time!” If you fancy yourself as the head honcho of Mafia bosses, you are encouraged to stage your negotiation skills and to earn that respect. 5 Families is a gangster-themed video slots game, developed by Red Tiger and is played on 5 reels, with 10 paylines. Find out more about the Bonanno, Colombo, Gambino, Genovese and Lucchese families, as you plan and negotiate the ultimate hit on the hidden treasures.

Before you light that cigar and the game plan begins, you will need to place your bet, in order to get those reels spinning. Should you prefer to take a code of silence, you may sit back, relax and watch the Mafia and their doings, by simply selecting the Autoplay function.

* Autoplay dialogue: expandable settings may be selected. This is where you  may choose additional criteria for the Autoplay stop, which includes stopping after a single win exceeds a certain amount or stopping at a Bonus Feature. Should you wish the reels to be sped up to the above average spin rate,  simply select the Turbo Spin function.

The VIP Room feature will be triggered after  5 consecutive wins (in succession). During this feature, all the symbol wins are multiplied by 5! All wins are paid when a symbol matches a payline pattern from the direct left side of the reels. Any progress features in this game, including symbols locked onto the reels, which affect subsequent spins, are saved for the game at the stake level that you are playing towards.

Different progress levels at different stakes on the same game are possible and the player may move between these features, by changing the stake. Any Free Spins that are awarded by any promotional campaign do not affect the progress made in the main game, including locked symbols (these will be saved and made available to the player again, upon completion of the Free Spins).

The prize value from one payline is equal to the total stake, divided by the number of paylines, multiplied by the symbol Multiplier – that is advertised in the paytable. Where multiple wins occur on multiple win lines, the total win values are summed. If more than one win occurs on the same payline, the largest win is paid.

The  5 Families slots game is hosted against a gangster-themed backdrop; join in on the fun and watch the VIP Room go up in smoke, the families puff on their cigars and relish the background Jazz music.

Enjoy playing the 5 families Mafia-themed slots game with Captain Spins. All new players who sign up with Captain Spins will receive a welcome bonus of up to C$1,200, plus 260 bonus spins and will have over 1,500 games to choose from.