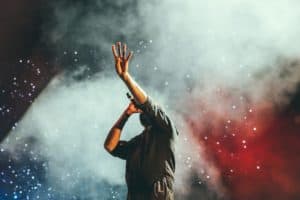 Ever since the introduction of online slot games over 20 years ago, we’ve been wooed by their captivating themes, realistic graphics and enthralling sound effects.  However, over the years, the music-themed category has grown under the players’ skins more than the others.

The repertoire of slot games available to Canadian players is comprehensive.  When it comes to themes, the choices are endless.  Subjects like movies, sports, superheroes and fantasy have always been at the forefront of players’ preferences.  However, there is one theme that usually resonates exceptionally well with players, that being music-themed games.

Music embodies emotion and, with its various genres, easily appeals to anyone’s heart.  Playing games that you can relate to always makes those games that much more exciting.  And, when a slot game is linked to your favourite song, album or group, the appeal grows exponentially.

Here are the five music-themed online slot games that are particularly popular amongst Canadian gamblers:

WMS Gaming has brought the King of the Rock back from the grave, with the Elvis the King Lives slot game.  As the name suggests, the game is based on Elvis and is accompanied by some of the best designs and graphics out there.

This 11-reel game comes with 80 paylines, each based on one segment of Elvis’s illustrious career, like blue suede shoes, hound dog, purple teddy bear, or a guitar.  Watch out for locked symbols, jukebox bonuses, free spins and 100x multipliers.

This NetEnt classic is based on the life of rock legend Jimi Hendrix.  Jimi had a short-lived career, but his brilliance and legacy have radiated on until this day.  Today, Hendrix reigns online, and his music-themed slot game is one of the most popular games in the US and Canada.

NetEnt allows the players to choose their favourite Jimi Hendrix song from the 60s, a time when the singer created his best music.  Hendrix is featured in the game as one of the game symbols, over and above the wilds and free spins.

Guns’ n Roses is NetEnt’s tribute to one of the most pioneering rock bands to have ever performed.  This group’s concerts became the stuff of legend, with NetEnt recreating the thrill and the delight of these performances, layered with impressive sounds and designs.

The players are free to select any of the Guns’ n Roses classics as their background music, from a setlist option.  The gameplay is intertwined with band members’ images, live clips of performances and the band’s logo.  There are also tons of winning possibilities abounding, with unique features like Encore Free Spins, Guitar Solo Multiplier and Legend Spin.

Motorhead is yet another slot game based on a legendary rock’ n roll band that became infamous for its member’s unhinged lifestyle.  With their name entrenched in the music hall of fame, these rock legends have moved to the online gambling arena, offering impressive gameplay and immense payouts.

The game features 76 paylines, with multipliers reaching dizzying payouts of up to 570x.  The players can make use of the generous Mystery Reel and Bomber bonus rounds, as well as wilds and free spins, to increase their prizes.  Players also have their favourite Motorhead songs at their disposal to groove to while spinning the reels.

Karaoke Party is an online slot game created by Microgaming, featuring nine paylines and fantastic background music.  This game’s backdrop is a karaoke bar, with the higher paying symbols being the solo singers or the group of friends using a microphone.

Karaoke Party features a disco light background and is accompanied by incredible visuals. You can win up to 10,000x of your stake and can instantly boost your bankroll if you trigger the free spins feature that comes loaded with up to 15 spins.

With such a variety of music-themed online slot games, the players in Canada are spoilt for choice.  If you are a melody aficionado, why not select the musical genre of your choice and groove the night away to your favourite tunes, while winning great prizes along the way?