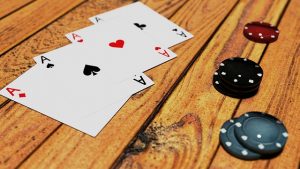 Baccarat, along with roulette, blackjack, poker and craps, is considered one of the big five casino table games.  Yet, it has often been approached with some reservation by an average table game player.  Our baccarat tips for beginners are there to reduce any gambling anxiety you might have and give you a few hints on how to play and win.

For a long time, baccarat has been associated with the upper classes, glitzy casinos, and James Bond-style scenarios.  Although some records indicate that baccarat was first introduced to France in the 15th century by soldiers returning from the Franco-Italian War, it was only in the 19th century that the game became the preferred vice of the French nobility.  As gambling was illegal in France at the time, the game was played in the salons and private gambling rooms of the wealthy.

Over the years, various versions of baccarat evolved.  These included the original three-person baccarat banque game, the modified two-person chemin de fer, as well as the widely popular baccarat punto banco, which took off in the Havana casinos in the 1940s and remains the most popular version of the game today.

To pull off a successful round of baccarat, you need to familiarise yourself with the game’s basic rules.  Although it might appear a bit overwhelming at first, the rules governing baccarat punto banco are straightforward:

Betting on a Player or a Banker

While it might appear that both the banker and the player hold equal chances of winning, the banker’s cards statistically carry a slight advantage over the player due to the rules governing the third card.  The third card rules are rather complex and are fully automated in an online game of baccarat.  Due to these rules, the banker is expected to win more hands in the long run.

However, there are perks to betting on the player.  All the winnings that a player collects will go to you.  Alternatively, should you bet on a banker, five percent of your winnings will need to go to the bank.  In the end, you can have a mixed approach, switching your bets from banker to player and vice versa.

Baccarat Tips for Betting on a Tie

The primary advantage of betting on a tie is that it carries a substantially larger payout since most baccarat games pay 8:1 on a tie.  Sadly, only about ten percent of hands in baccarat do result in a tie.  To put this in perspective, betting 100 hands on a tie will result in you winning just ten times.

Of course, statistics are not failproof, and you could walk away with 90 wins for 100 bets placed.  Ultimately, due to its variable nature, putting all your bets on ties is not recommended, although including them occasionally could improve your punting outcome.

Baccarat’s unwarranted image as the bugaboo of the casino industry is mainly due to its more niche appeal.  But, with the game now a staple in most land-based and some online casinos, it has become more accessible to the masses.  We hope you have found our baccarat tips helpful and wish you luck with your first game.