Uncertainty Over the Future of Kingsway Entertainment Complex 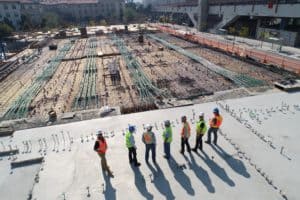 The future of the multimillion-dollar Kingsway Entertainment Complex hangs in the balance, with Sudbury city council still pondering over the new centre’s proposed location.

The multimillion-dollar Kingsway Entertainment Complex project announced almost four years ago, has still not taken off.  The complex will supposedly house a large casino under the Gateway Casino brand.  However, Sudbury city council is still deciding whether to greenlight the project due to a widespread public backlash.

Latest reports indicate that the council is contemplating other possible locations for the Kingsway Complex, such as the parking lot off Shaughnessy and Minto streets, that previously fell out of consideration.  An idea of a total revamp of the old downtown area, which will turn 70 in 2021, has also been discussed.

What Does the Future Hold for Kingsway Entertainment Complex?

The discussion of alternative ideas came as somewhat of a surprise, since the councillors were initially fully behind the project in its original format, over the last three and a half years.  Robert Kirwan, a local town councillor, expressed his frustration on the matter, demanding that the project be scrapped after the difficulties experienced at the superior court.

Mayor Brian Bigger requested that all further deliberations regarding the project be put aside until the project gets officially presented to the city council this spring.  Bigger asked that councillors take into consideration public concerns of having an entertainment district that includes a casino.

Bigger also pointed out that Gateway Casinos’ commitment to building a gambling facility at the future Kingsway Complex needs to be reviewed since such a casino will be a cash cow for the local budget inflows. The councillors still await an official plan for a suggested complex hotel, the building of which will likely be impacted by the current financial crisis.

When the idea was first proposed in June 2017, Kingsway Entertainment Complex was seen as a drawcard to attract more visitors to the area and generate additional revenue for the local budget.  However, the local planning appeal tribunal blocked the construction of the complex in December 2020.

Further concern was raised since all Gateway Casino venues have suspended their operations due to the ongoing pandemic.  Gateway Casinos is currently putting all its available resources into the reopening of its existing venues and might not have the capacity to focus on new facilities.