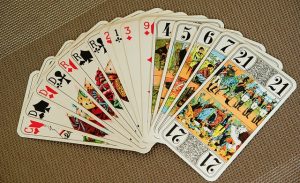 Card games have been around for centuries, and various versions of these have emerged, with firm favourites grabbing prominent spots at local casinos.

Some scholars are of the oppinion that the first playing cards were invented in China during the rule of the Tang dynasty in the ninth century AD.  Others see cards originating directly from dominos and mah-jong. Either way, these card games were usually played at the local watering holes, accompanied by drinks and a large company of people.

Card games made their way from China to the Mamluk Egypt somewhere during the 14th century, and from there further onto Europe.  Today, card games are still one of the most socially drawing forms of entertainment, especially at establishments such as casinos.

Here is the list of the top seven card games enjoyed at land-based and online casinos:

Classic poker is the epitome of card gambling games.  The game is pretty straightforward: try to get the best hand from five of your community cards and two private ones.  Original poker has generated many offshoot versions of the game, including video poker and online poker, with national online poker tournaments taking place regularly.

The downside of poker is that it is more a game of skill than of luck, so it is advised that you brush up on your knowledge first before you brave the game.

Unlike poker, blackjack is more about luck and less about skill.  The rules are pretty simple and require a player to get a higher number than the dealer and reach 21, without going over this number and busting.  Online casinos offer progressive blackjack games where jackpots can be huge.  The good news is that the house edge can go as low as 0,5% on blackjack, which leaves the player with good winning potential.

Some of the more popular versions of blackjack include pontoon, single deck blackjack, double exposure blackjack and Spanish blackjack.

You might hold back from a baccarat table due to its complex appearance, even though it is a surprisingly easy game to play.  During the game, the dealer deals a coup, or two cards, with the players betting on themselves or the dealer to win or to tie.  The aim is to get a total of nine or closest to nine, with an additional card being drawn if an eight or nine is totalled during the first draw.

Texas hold’em is a variation of poker, but instead of locking horns with the house, you play against your fellow gamblers. Since no inherent edge exists in this game, it has grown in popularity amongst players.  This game requires an excellent knowledge of poker, and Texas hold’em tournaments can offer prizes in excess of CA$1 million.

Another version of classic poker is the three-card poker.  Although it might, at first hand, appear like a quick and easy game due to the low number of cards used, it is anything but that.  The real skill in this game comes from choosing which type of bets to place.  Three-card poker payouts are often sizey, although they can be volatile too.

While many versions of this game exist, the most popular one is seven-card stud poker.  Each round, the players receive four cards dealt face up and three cards dealt face down.  Since half of each player’s cards are visible to others, the game moves out of the realm of probability and towards gambling psychology.

Caribbean stud poker is a brisk game that brings together substantial cash prizes found in progressive poker games and the rules of classic poker.  A player aims to defeat the dealer by having the best hand and, at the same time, place smaller side bets to win the Caribbean stud poker jackpot.  This type of poker is popular with those players who wish to transform a relatively small stake into a prize worth thousands of dollars.

When it comes to casino card games, options abound.  Whether you like a dynamic game like stud poker or a more laidback one like blackjack, the choice is yours on how you wish to spend your money.  Choose your favourite casino card game from our list today!