The History of Gambling and Wagering Through the Ages 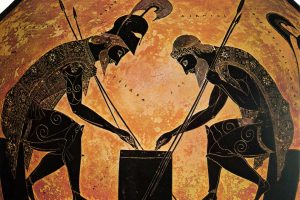 The evolution of humankind and the history of gambling go hand in hand, with both pathing a shared trajectory since the very first wagering took place by primitive man long before the recording of history began.

No matter how far back in history we go, there are mentions of people engaging in games of luck and skill with the aim of financial gain.  While it is simply impossible to trace back every account of wagering and every single game of chance that was pursued, we can formulate a clear roadmap of the history of gambling and how it has evolved and developed over the years.

Here are some key milestones that were passed on the long road to modern gambling:

While there is evidence that first gambling acts were performed during the Palaeolithic period of prehistory, the first recorded reference to wagering comes from ancient Mesopotamia, where a six-sided dice game was played as early as 3000 years before Christ.  It is believed that this rudimentary game evolved from even earlier divination ceremonies that were performed using dice.

Ancient Greece and Rome birthed modern western culture and also impacted the evolution of gambling.  Greek poet Sophocles linked the dice to mythological heroes during the siege of Troy.  Romans, on the other hand, loved gaming so much that the authorities forbade the use of the dice and those who were caught gambling had to pay a penalty of four times their wagered amount.  Romans also invented the first gambling chips.

The ancient Chinese civilisation took the precedence in the development of gambling, with primitive gambling houses sprouting up during the first millennium BC, and card games and lotto emerging as early as the 9th century AD.  The cards used in China marginally resembled modern cards, representing both the game and the stake, like modern trading cards.

The first recorded card game in medieval Europe was baccarat, which appeared as early as the 1400s when it migrated from the Italian city-states to France.  The game continued to evolve over the next few centuries to become what it is today and is the go-to for all casino high-rollers.

While we don’t know who invented blackjack, the first reference to the game appeared in Miguel de Cervantes’ literary masterpiece, Don Quixote, in 1601.

The watershed of the development of modern gambling took place in renaissance Venice, when the first casino, Ridotto, opened its doors in 1638. The casino was set up to provide a safe and regulated gambling environment amidst the chaos of the annual Venice carnival.  And, the rest is history.

The French Revolution was a time of great upheaval and a significant period for the evolution of games of luck.  The first roulette table emerged in the gambling houses of strife-torn Paris during the dying days of the revolution.  The traditional game only had one zero and truly became popular when it was adopted by the Casino de Monte-Carlo a century later.

If there’s anything that’s as synonymous with cowboys and the Wild West, it’s a saloon and a poker table.  The game is believed to stem from the French game poque and was first played in the gambling houses of New Orleans in 1829 from where it spread to the other newly charted territories of the American West.

The first gambling machine originated in the workshop of Sittman & Pitt in 1891, using 52 drum-reel cards to create a poker game.  Around the same time, Charles Fey from San Francisco invented the first slots machine, named the Liberty Bell.  Today, the bell remains a common symbol on many slots machine reels.

The US has always had a love-hate relationship with gambling.  Due to public pressure, gambling was banned in 1910 across the land, only to be legalised again in the 1930s.  Today, it’s a mixed bag of laws and regulations that governs gambling legislation across individual states.

Globally, internet users have generally shifted from desktops to mobile devices.  This has led to online gambling sites to evolve their offering, creating mobile apps and allowing gamblers to take their favourite pastime with them, anywhere they go.

While its difficult to predict what the future of gambling holds, there is a good indication that virtual reality technology will play a big part in the further evolution of gaming.  Things like VR headsets will be your tickets to new virtual casinos, which are expected in a few years from now.  And, after that? Well nobody really knows, but when it comes to gambling, all things are possible.