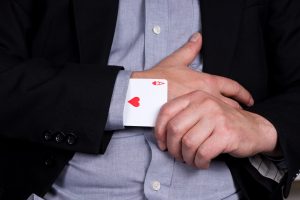 While some criminals brazenly attempt to raid casinos using cold weapons and brute force, others utilise far more sophisticated scams and tricks to dip their hands into the cookie jar.

It is a known fact that criminals go where the money flows.  As with banks, casinos have become favourite targets for unscrupulous felons looking to score a quick and sizey buck.  Unlike most robberies that involve the use of force in plain sight of everyone involved, sophisticated scams mainly go unnoticed. However, this is what makes them that much trickier to deal with by the casinos.

With modern technology at their fingertips, clued-up scammers can launch a successful attack on a casino from the comfort of their homes.  Fortunately, many casinos have moved ahead with the times and have invested millions into security systems, to thwart any potential threats.

Here are some of the five greatest scams in casino history that were ever conceived:

A gang of four French and Italian gamblers struck the Cannes casinos in 2011 and walked away with US$84,000.  The group managed to discretely mark poker cards with invisible ink that was only visible through modified contact lenses that they were wearing.  Their first stint went unnoticed, and they bagged in thousands of dollars.

However, on their second try, they aroused the suspicion of the staff with yet another unlikely sequence of wins within a relatively short timeframe.  The authorities were alerted, and a quick inspection identified the marked cards.  It took a bit longer to figure out the lenses, but once all the evidence was there, each of the would-be crooks received a lengthy jail sentence.

The Roselli brothers are probably the most prolific serial casino scammers in history, with their winnings topping a staggering US$40 million at the peak of their wayward career.  The brothers forged identities of unsuspecting victims to set up credit lines with targeted casinos.

Using the services of a master hacker, the Rosellis hacked information about individuals with perfect credit records.  Once they opened up an account with stolen credentials, they would deposit US$50,000 into each to reassure the casinos to extend further credit to their account.  By 2000, the brothers had multiple accounts with each worth over a million dollars.

It took the authorities some time to figure out the scam, only to learn that the real Rosellis had died years before and that the criminals were using their identity.  Ultimately, the culprits were never found, with the scam leaving a trail of innocent people who ended up on the receiving end of debt collectors.

This is one of the more classic scams, going back to the early 70s.  A roulette croupier in France, who was also an avid amateur radio operator, developed a mechanism that used a small transmitter that directed the ball, into which a weightless radio receiver was installed, towards a particular number.

With his family members in cahoots with him on the floor, the family were able to coordinate every number called.  After winning over a million dollars in a single week, one of the family members aroused suspicion as they happened to be a familiar face each time the casino experienced a massive loss.  As a result, they were questioned, and the casino floor was scanned for radio frequencies which uncovered the scam.

The Cutters were active across the US and the Philippines in 2011, by using a tiny sleeve camera to hone additional information when players got invited to cut the cards during a game of baccarat.  Once the cards were cut, the player would leave the table and pass the camera to the next crook, who would use the information to make more targeted bets.

The Cosmopolitan Casino in Las Vegas finally uncovered the scam, although the scammers had to be released shortly after that due to lack of substantiating evidence.  They were soon all arrested again in the Philippines but managed to escape, never to be seen or heard from again.

A gang of conmen from New York struck Ohio casinos in 2012, by using accomplices and swapping chips across various roulette tables.  One of the lawbreakers would play a low-stake game and discreetly steal coloured chips from the table.

After that, they would move to a higher value table, adding their chips into another player’s game and thus increasing their relative value.  The estimates show that the gang banked as much as US$2,000 per switch, although it’s hard to say what the total extent of their winnings is.  While some of these scammers were later apprehended, a number of them remain at large.

Despite the best attempts of casinos to limit casino scams, the scammers are continually thinking up new and more sophisticated methods to use. While many felons do get caught in the end, many get off scot-free.  Nevertheless, besides apprehension, many of their methods deserve a slight bit of respect for their ingenuity.