Montreal Player Scoops Up CA$390,000 Annually for a Lifetime 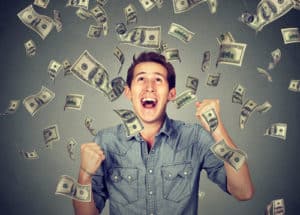 A fortunate lottery player in Montreal recently won a combo jackpot from Loto-Quebec, which has secured him hundreds of thousands of dollars annually for the rest of his life.

Léonce Simard had lady luck watching down of him when he managed to scoop up a phenomenal combo jackpot that is bound to change his life completely.  Simard was fortunate enough to win two grand prizes with his Grand View lottery tickets.  The prizes include CA$1,000 a day for life, as well as an additional CA$25,000 per year for a lifetime.

Simard is now part of a very elite group of lottery players around the world who have managed to win double jackpots in a single day.  Grand View remains one of the most popular lottery tickets that is sold in Quebec and is renowned for its generous wins.  With the tickets costing a mere CA$3, the competition is tough amongst the players vying to win the jackpot.

The odds of winning a prize are an impressive one in 6,8, while the chances of winning the grand prize are estimated at one in 13,348,188.  Simard’s lucky streak got him both the first and the second-best prizes in his lottery game.  His lucky number combination was 1, 6, 11, 14 and 16, with the grand number being 4.

For matching five numbers, Simard was awarded CA$25,000 per year, while his matching of the grand number gave him an additional CA$1,000 per day for life prize.  With such an astonishing stroke of luck, Simard technically won’t need to work a day more.

Great Prizes Up for Grabs

The number combination chosen has a special meaning to Simard and is a sequence of numbers that he uses whenever he plays the lottery.  He used the combination on both of his lottery tickets, with each one being eligible for a different grand prize.

In total, Simard has bagged approximately CA$390,000 per year for a lifetime.  When he was informed of his win, Simard could not believe his ears.  For the time being, he wishes to take his time and evaluate his new circumstances before he makes any significant decisions.