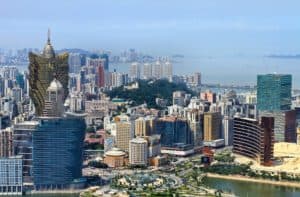 While Las Vegas is often considered to be the gambling capital of the world, Macao has become its counterpart on the other side of the planet, with both vying for the spot amongst the world’s top gambling destinations.

When one thinks of casinos and top gambling destinations, Las Vegas is usually the first thing that springs to mind.  While Sin City is the gambling centre of North Americcounterparta, Macao does not lag far behind, being the undisputed casino playground of Asia.

So, the question begs, should Macao be known as the Las Vegas of the east and one of the top gambling destinations globally, or has its offering far surpassed that of what you can find in the Nevadan desert?

A Day Visitor or a Weekend Stopover?

While only half of the visitors to Macao decide to spend at least one night in the territory, 99% of those who flock to Las Vegas stay overnight in one of the local hotels.  In fact, almost all Las Vegas visitors stay at least two to three nights in the city, in one of its many hotels.  On the contrary, Macao visitors on average spend up to two days gambling there, with many spending the entire night behind the slot machines and not opting for accommodation.

As a result, Macao has just over 39,000 rooms on offer at its various hotels and hostels, compared to approximately 150,000 rooms peppered around Las Vegas.  When it comes to cost, an average room in both Las Vegas and Macao will set you back about US$120 – US$130 a night in a three-star hotel, although this price can vary considerably depending on your hotel preferences.

Although Las Vegas has got twice the number of casinos that Macao has, the revenue of the Chinese territory is double that of Sin City, ranking it comfortably as one of the top gambling destinations globally.  One reason for this is that three-quarters of people who visit Macao annually come there specifically to gamble.  At the same time, this number is “only” about 69% of visitors in the case of Las Vegas.

Even though the average budget of a Las Vegas gambler is US$619 compared to Macao’s US$250, the annual gaming revenue of Macao is US$28 billion, which towers above Las Vegas’s much smaller income of US$11,1 billion per annum.  Also, Macao only has half the number of casinos that Las Vegas has, although it is considered a more serious gambler destination.

You won’t see many people coming to this Chinse territory to party, and even small pleasures like drinking and smoking on the floor are generally not permitted.  The interior layout of the local casinos is designed exclusively for gaming, as opposed to the ones in Las Vegas that are multi-layered with different entertainment zones, which aim to trap you inside for as long as possible.

The gambling revenue of Macao relies overwhelmingly on baccarat and sic bo, which accounts for over 90% of its income, with table games being the preferred choice.  Across the Pacific, the situation is very different in Sin City, where slot machines are the most popular offering and are often positioned side-by-side with table games.

Additionally, Macao boasts a large number of private VIP gaming rooms that can be found in any casino.  Macao also attracts a far larger contingent of foreign visitors due to its lax tax laws.  While as much as 30% of your win has to be forfeited to the state in Las Vegas, in Macao you won’t need to pay a single cent, since gambling proceeds are tax-free.

While the primary allure of Las Vegas rests on its superior casinos, many of its visitors come to the city for other reasons too, like attending conferences or seeing shows.  The tourist profile of Macao gamblers tends to be more puritan, with any additional entertainment seen as a value add.

Gastronomically, both cities offer a fantastic selection of restaurants to suit everyone’s taste.  While Las Vegas has recreated a few of the top global tourist magnets, such as the Eiffel Tower, the Cheops Pyramid and the Pizza di San Marco, Macao offers the real deal with colonial Portuguese-era boulevards, cathedrals and fortresses dotting the city.

In closing, both Las Vegas and Macao have got more on offer than any other gambling destination.  While the oriental Sin City is more geared towards gambling professionals, its US counterpart is all about fun, fun and more fun.  Visit both of these top gambling destinations and tell us what you think.