Loto-Quebec Revenue Down but Stays Above Target 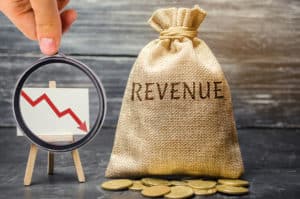 While Loto-Quebec financial yearend revenue fell by 3,1%, the operator remains optimistic, noting that the figure remains above target despite the effects of the COVID-19 pandemic.

Loto-Quebec ended the last financial year with revenue of CA$2,74 billion, which represents a dip of 3,1% compared to the 2018-2019 financial year.  Profit also declined to CA$1,35 billion amidst a downswing experienced by the entire industry due to the ongoing coronavirus-related economic slump.

Despite the negative sentiment, the casino industry assumed a top spot when it came to revenue, raking in CA$963,7 million, of which CA$694,8 million came from land-based gambling, down 5,1% year on year.  However, a jump in revenue of 25,7% from online casinos offset this decline.

Lotteries, too, recorded a minor decline of 2,8% for the financial year ending 31 March, with revenue coming in at CA$929,4 million.  The only segment that saw a rise during this period has been online lottery games, where revenue increased by 37,8% to CA$39,4 million.  To date, online lottery sales have shot up by 160% since March alone.

According to Lynn Roiter, CEO of Loto-Quebec, the primary reason for the decline is because the previous financial year saw a higher number of large jackpots that contributed to the revenue.

Gaming machines were the largest source of revenue, bringing in CA$872 million during the fiscal year.  This still represented an 11% year-on-year decline due to the change in revenue reporting methodology used by Salon de Jeux.

Profit Decline, but Still Above Target

Hélène Fortin, Loto-Quebec’s chair of the board, noted that although the overall figures were less than those of the previous financial year, they still remained above the set targets.  Fortin also commended the industry for the way it adapted to the crisis.

“The board is also pleased with the reaction of Loto-Quebec in the context of the pandemic,” Fortin said. “In addition to having taken quick action to protect the health of our customers and employees, the organisation has made several gestures of generosity to contribute to collective efforts and support the most vulnerable.”

Due to the spread of the pandemic, all kiosk sales were suspended on 21 March, with other land-based venues closing down before that date.  Subsequently, the sales only resumed in May, with gaming halls and land-based casinos following suit in July, accompanied by capacity reductions and social distancing enforcement.