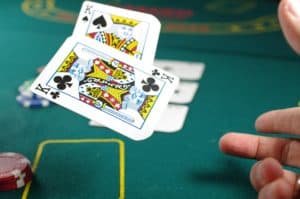 Due to an increase in demand for live casino games as the result of the ongoing pandemic, Loto-Quebec has upped its games offering by a notch.

Loto-Quebec has been hard at work restructuring its live online games offer, to meet the growing demand for this type of virtual gambling.  Swedish Evolution Gaming will provide live dealers based in Georgia and Latvia, boosting the Crown Corporation’s overall user experience.

The unavailability of in-house casinos caused by the government’s health and safety regulations has taken its toll on gamblers, who have primarily shifted their business to online casino platforms.  Subsequently, there has been a spike in demand for quality online games and adding a live human experience to the bag is a sure way to boost gambler expectations.

Evolution gaming was set up in 2007 and has grown to become a leading supplier of online casino games.  The company has partnered with some of the largest online gambling platforms in Europe, such as LeoVegas, Royal Panda, and BetVictor.  After the initial success on the old continent, Evolution Gaming leapt across the pond by setting up a live studio in New Westminster, British Columbia.

Although Evolution Gaming is officially a Swedish company, its primary revenue is generated in Malta, a known tax-haven.  The company enjoyed a low tax rate of just 4,5 per cent in 2019, registered under Evolution Malta Ltd.

No Clash with Union Expectations

Jean-Pierre Proulx, a representative of the Canadian Union of Public Employees, stated that the employment of overseas croupiers is in line with union expectations.  This comes even though Loto-Quebec had to dismiss over 4,000 employees due to the recent string of lockdowns.  According to Loto-Quebec, the switch to foreign suppliers is expected to reduce overall costs and diversify the existing live-games offering.

Another example of a successful partnership between Evolution Gaming and Loto-Quebec has been the establishment of Live Casino in Vancouver.  The sprawling in-house casino venue straddles over 15,000 square feet.  The large facility offers a broad selection of gambling activities, each available in English and French.