How does the Dead Man’s Hand Work in Poker? 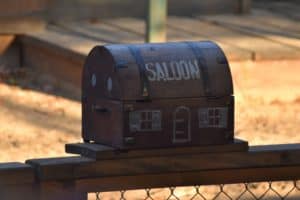 Many myths surround a hand that is made up of black eights and two pairs of black aces, which is more commonly known as a dead man’s hand in poker terminology.

The dead man’s hand is a common term used in poker, although very few players are aware where this expression originates from.  Although the meaning of this term has changed over time, its origin is linked to the legendary gambler and lawman from the old wild west, Wild Bill Hickok.  The story goes that the cowboy legend was shot dead while holding a dead man’s hand, which is why this combination of cards is considered as unlucky in poker.

How is Hickok Associated with a Hand Name?

Legend has it that the term dead man’s hand was coined in 1876, after the murder of James Butler Hickok, or as he was more commonly known, “Wild Bill” Hickok.  Hickok was killed by a local drunk, Jack “Crooked Nose” McCall, after the latter lost every single dime in a poker match between the two.

The following day, McCall came back to the saloon and was furious to see Hickok there again.  Hickok usually sat with his back to a wall because he was paranoid about being killed, but on that fateful day he didn’t, since his opponent refused to swap seats with him.

After approaching him from behind, McCall allegedly shouted “Damn you! Take that!” and shot Hickok in the head with a Colt .45 revolver.  Hickok died instantly, and McCall was executed for his crime by South Dakota authorities seven months later.  According to accounts, Hickok’s hand at the time of his death was made up of black aces and eights.

While the dead man’s hand has got a lot of historical clout surrounding it, it isn’t that much of a valuable hand in an actual game of poker.  Two pair is not a bad hand, although it isn’t as worthwhile as a straight, a royal flush or a full house.  Although it’s always fascinating to get dealt a dead man’s hand, it doesn’t impact your chances of winning and its value lies in its perception.

Many artists have drawn on the image of a dead man’s hand as a symbolisation of foreboding or impending doom.  Poker players have often associated this hand with a presumption of an unwanted surprise in the future.

In fiction, the term crops up in several novels.  In One Flew Over the Cuckoo’s Nest, Ken Kesey states that McMurphy has a dead man’s hand inked on his shoulder, which has had various interpretations.  James Patterson also references it in Along Came a Spider, when a character explains how her father won his revolver with a hand of eights and aces, and even uses the term as her computer password.

TV shows have also seen the use of this imagery, either as a demonstration of an opportunity for characters who have cheated death or to highlight the imminent demise of an actor.  For example, in Criminal Minds, Hotch plays poker with a death row inmate in the hope of getting the location of another victim. Hotch claims to have a dead man’s hand, which is what his opponent believes he should have. Hotch then reveals another ace, turning his dead man’s hand into a full house and winning the game.

There is even reference to dead man’s hand in video games, where it represents the highest possible hand in the card game Doomtown.  Also, in Fallout: New Vegas, players can collect cards that make up a dead man’s hand, to get an achievement.  The hand also features in the following video games: Wing Commander IV, Werewolf: The Apocalypse, and Need for Speed: Carbon.

But, above all, the term is most prevalent in music, and has featured prominently in many songs:

Now that you are familiar with the dead man’s hand, there is no reason why anyone should catch you off guard at the poker table.  Remember, luck is subjective, and this card combination can be your lucky break.  So, go on, and strike it rich!