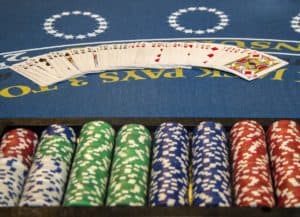 Blackjack is an all-inclusive game that brings people together.  Celebrities also have an affinity for this fun game, and many well-known celebs from the world of music and entertainment regularly try out their luck around a blackjack table.

Blackjack is a game that is enjoyed by pretty much everyone, young or old.  Thus, it comes with no surprise that several celebrities have made blackjack one of their favourite pastime games.  Some have even become notorious for their scandalous behaviour around a gambling table.

Here’s a list of some of the better-known celebrities that regularly enjoy a game of blackjack:

You either love him or hate him, but no matter what, you have to give credit where its due and Ben Affleck comes on top of the skills list when it comes to blackjack and poker.  Unlike his acting, there’s very little one can say about his gambling proficiencies.

Affleck was once even kicked out of the Hard Rock Hotel & Casino for reportedly winning too much money.  He did, however, admit at a later stage that game analysis and card counting are a few jokers up his sleeve that he readily uses to win.

One can say that where there’s Ben Affleck there’s Matt Damon, and one’s love of the dice has undoubtedly rubbed off on his acting counterpart.  Damon once played live blackjack on Jimmy Kimmel, and he is no stranger to taking his brushed-up card skills to the casinos.

Although he might not be as skilled as his buddy Affleck, he doesn’t need to be, with the amount of cash he has got to spare.  If Affleck and Damon ever locked their horns in a blackjack duel, our money would likely be on Affleck.

When you are sitting atop of a mountain of cash like Paris Hilton, you can afford to splurge at the casinos occasionally.  Naturally, with her vast fortune, being a pro at the game is not even obligatory, although reports indicate that she is not too shabby with the cards at all.

While her rise to fame might have come from nonsensical TV shows and occasions sex tapes, Hilton has attracted a bit of a repute for her blackjack skills.  In fact, she once won a whopping US$50,000 in a single sitting at the blackjack table.  Her love of gambling has made her the face of a few online gambling sites, and she is often paid to make appearances at Vegas casinos.

While he makes frontpage news these days mainly due to his more than public spat with the rest of the royal family, Harry is also known for an outstanding track record around the blackjack table.  Of course, this has proven to be yet another point of contention between him and his (not so) loved ones.

During his last stopover in Las Vegas, Harry was spotted knocking back free drinks at the Wynn Casino.  Although he only lost US$300, this is usually small change for this gambling aficionado.  At least the British taxpayers no longer have to worry that their hard-earned money goes towards funding this royal’s gambling sessions.

A Few More that Made the Cut

Sean Combs also love a bit of blackjack and is no stranger to weird demands, having once asked for his very own blackjack table to be set up at the MTN Music Awards.  On the other hand, fellow rap artist 50 Cent is also a diehard fan of the game, even though we doubt it is just cents he is putting down on the table.  50 Cent even runs his own online blackjack game, 50 Cent Blackjack.

Blackjack is also enjoyed by sporting celebs, with both Michael Jordan and Charles Barkley being basketball’s representative around the table.  And, not to underestimate the ladies, UFC fighter Dana White and Academy Award nominee, Jennifer Tilly, have both demonstrated phenomenal skill at the game.

Of course, numerous other celebrities like to hone their blackjack talents occasionally.  The game has become a real magnet for celebs, leaving us guessing who the next big blackjack celebrity will be.