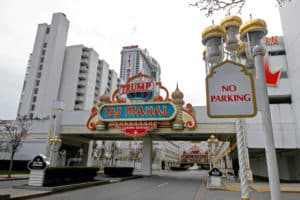 Donald Trump is an archetypal example of an American success story, although his venture into the world of casinos ended up as a total disaster.

Once upon a time in the US, the brand name “Trump” appeared everywhere, from construction sites to steaks. A young, real-estate billionaire’s son was introduced to the business world and given the keys of a kingdom. But running New York housing projects was not enough for Trump, and he soon set his sights on the casino world.

Recently, the last reminder of the Trump casino legacy has come crashing down. The abandoned Trump Plaza in Atlantic City slowly disintegrated into ruin, a bankrupt business empire that nobody wished to take over.

Projects such as the Trump Taj Mahal were rebranded as Hard Rock Atlantic City. The Trump Marina Casino became the Golden Nugget, and all his other gambling ventures fizzled out over the decades.

But Donald Trump’s casino story begins decades ago in the US gambling mecca of Atlantic City.

Trump began his casino ascent in Atlantic City in the 1980s. It was the beginning of the era of greed in America, where yuppies blossomed into the materialists, and their mantra of “greed is good” rang across Wall Street and beyond.

Trump grabbed prime real estate in Atlantic City after the town fell on hard times. Trump could not get a license to open his own casino, so he entered into a partnership with Harrah’s at the Holiday Inn Casino. After earning his chops there, he was granted a casino license, becoming a majority shareholder in the Holiday Inn, which was renamed to Trump Plaza Hotel and Casino in 1986.

To build his gambling empire, Trump took out massive loans at high-interest rates, all the while telling regulators that he would not overstretch himself. Soon, he reversed himself and issued US$675 million in junk bonds at a 14 per cent interest rate to continue his business building.

By the time the Trump Taj Mahal was finished, the total debt was US$820 million.

To make the interest payments alone, Trump would need to earn US$1.3 million daily, something no casino had ever done before. Then, the house of cards began to crumble.

As Trump’s casinos began to sink in debt, Trump turned to his father, Fred C. Trump, to bail him out with a cash injection of US$3 million. Concurrently, while Trump was running his New York real estate and Atlantic City casino empire into the ground, he made personal profits. By paying himself living expenses, salary and other perks, he lived a billionaire lifestyle while his gambling ship was sinking.

A year after opening, the Trump Taj Mahal was bankrupt.  The Plaza and the Castle followed suit in 1992. Trump’s three casinos were in direct competition with one another, and the Taj cannibalised the two smaller casinos.

Trump was unable to make any of his principal or interest payments. His lenders insisted that he generates a business plan, hire a CFO, and sell off his unnecessary personal assets like the plane and the yacht. They also recommended a “meagre” US$450,000 monthly budget to cover household and personal expenses.

In bankruptcy proceedings, Trump agreed to give the lenders half a stake in his failing businesses in return for lower interest rates. It was also decided to hold off personal claims against Trump for five years.

However, the debt never came down. Trump then shifted the ownership of the Plaza into a publicly-traded company – Trump Hotels and Casino Resorts. Ten million shares were sold at US$14 each in the initial offering, and Trump sold another US$155 million worth of junk bonds at a 15.5 per cent interest rate.

Instead of repaying his massive casino debts, he used the US$300 million to clear only his personal debts, leaving the entire casino empire in ruin. He also found an easy way to stay on top by paying himself US$1 million annually and a US$5 million bonus.

All in all, Trump’s venture into the world of gambling can be viewed as a misadventure.  None of the establishments that he ran had any long-term prospects.  However, Trump remains one of the toughest players on the American business scene, and with his ambitions now turned towards the 2024 presidential race, we are bound to see more aces up his sleeve soon.