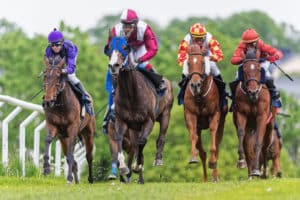 Alberta’s horseracing scene has seen a surge of activity over the past few weeks, with the Century Mile Racetrack leading the way with races.

The Century Mile Racetrack and Casino in Edmonton has seen a busy recommencement of its thoroughbred season, with a reported CA$800,000 a day being amassed through live race events taking place on its premises.

The last few months have been turbulent for the local horseracing industry, with all racecourses having had to temporarily suspend their regular events as a result of the ongoing pandemic.  Century Mile Racetrack has been one of those unfortunate venues that had to press pause on its racing schedule and halt the 2020 live season.

A Surge in Year-on-Year Results

Amidst the uncertainty, horse racing was allowed to resume on 21 June, albeit with a list of restrictions in place.  As the only mile-long racetrack west of Woodbine, the Century Mile Racetrack remains a sought-after location for horseracing fans across Alberta.

Season expectations were not high, although they were exceeded in the end, with daily revenue averaging above CA$800,000.  The events drew in vast crowds of punters who were unable to attend races during the period of the lockdown.

It can be recalled that this new racecourse was opened in spring of 2019, but only managed to average CA$162,000 per day, at the time.  In comparison to this year’s revenue, an impressive 400% jump in income can be observed.

The 2020 season proved to be such a success since a larger number of bettors were interested in following the races.  Harness racing also saw a surge in profits, bringing in an average of CA$175,000 per day, which marks a 75% surge compared to last year’s figures.

Kent Verlik, the CEO of Horse Racing Alberta, noted that the year-on-year improvement on both offerings exceeded all expectations, mostly since only a few months ago it was unclear whether there will be any horse racing taking place in Alberta this year.

According to the original line-up, Century Mile Racetrack planned to host 227 race days this year, although this has now been downgraded to only 140, due to the missed days in March, April and May.  Additionally, harness racing saw a return on 15 November, bringing more race days into February.