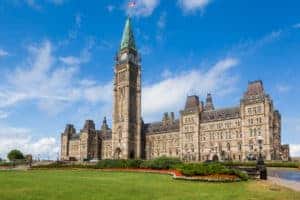 After looking for a while to further revolutionise its gambling industry, Canada is on the verge of legalising single-game betting on its territory.

After an extensive process, there will be one last hearing this Thursday to determine the fate of single-game betting in Canada. Bill C-218 was introduced by MP Kevin Waugh some time ago, and its passing by the parliament will bring changes to Canada’s Criminal Code.

These changes will finally allow Canadian gamblers to place bets on single-game sporting events legally. Previously, single-game bets were not allowed to discourage match-fixing, but state coffers are currently in desperate need of funds.

This week’s hearing is crucial for the future of Bill C-218 and single-game wagers in Canada. There are still a few steps before the bill becomes law, after which provinces will regulate the change in their own way.  The provincial governments will also need to determine whether they’ll offer the new-betting options to their residents.

Before the hearing, the House of Commons Standing Committee on Justice and Human Rights had discussed the matter. The meeting on the 25 March will be the third one for the bill.  If it passes the vote, it will be sent to the Governor-General of Canada for Royal Assent.

Over the years, Canada had numerous failed attempts to legalise single-game wagers.  However, the bill now has a chorus of supporters behind it, such as casino regulators, provincial governments, and gamblers themselves. Many casino regulators voiced their support by stating that the legal change will promote a more competitive market. Reports suggest that with the legalisation, between CA$125 million and CA$175 million will be added to the industry’s annual revenue.

The authorities have requested a comprehensive study on the matter before the next hearing on 25 March.  The Canadian Football League Players’ Association has been welcomed to attend the upcoming vote. The association is a big supporter of single-game betting and is eager to see how the situation will unfold over the coming weeks.

The British Columbia Lottery Corporation has been a vociferous supporter of the change and believes that this amendment would be the right step forward. According to the corporation, the introduction of single-game betting would be welcomed by gamblers who have been restrained in terms of possibilities, giving them more freedom and choice. Additionally, the Crown Corporation will benefit from the additional revenue while its properties remain closed.