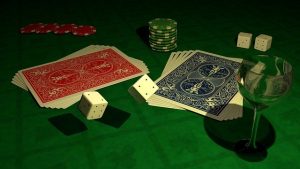 While you won’t be blamed for not hearing of red dog poker, it is widely popular in many online casinos and is one of the simplest casino games to learn how to play.

Red dog poker is a game that made its way to the US from Europe by trade ships that frequented the transatlantic shipping routes during the 19th century.  The game is a variation of in-between and acey-deucey from which its rules stem.

The game was trendy in Las Vegas during the first half of the 20th century.  Today, although its popularity has somewhat declined in land-based casinos, it is still prominently featured at many online casinos.

How to Play Red Dog Poker?

If there’s one thing that you need to know when it comes to red dog poker, it is that it’s one of the simplest casino games around.  The game is played with anywhere from one to eight standard 52-card decks.  As with classic poker, regular rankings are used, with aces being high, while suits don’t matter.

Each round commences with a player placing a bet.  When playing online, the player usually can bet anywhere from CA$1 to CA$200, with some online casinos allowing even higher stakes.

After all the players place their bets, the dealer will deal two faceup cards.  At this point, the dealer would look for two things.  Firstly, should the cards show two consecutive numbers (e.g. four and five, or ten and jack), the hand is deemed to be a push, and the wagers are returned.

Should the drawn cards be neither consecutive nor equal, the dealer will announce a spread, which will determine the potential payout.  For example, if the two cards displayed are a 2 and a 7, then there’s a four-card spread (3, 4, 5, 6).  And, if the third card dealt lands within the spread (i.e. the card is a 4, 5, 6 or 7), the player will get paid according to the paytable.

However, before the third card gets dealt, the player will have two options.  One is to raise, through an additional bet that is equal up to the original bet.  The second option is to call, by not making an extra bet but continuing the hand with the original bet.

Can You Beat Red Dog Poker?

Red dog poker is primarily a game of chance, and therefore no strategic approach can better your lot.  The only thing that you can consider doing would be to raise when the spread is favouring you.  However, that would only be when you have a spread of seven or more cards, regardless of the number of used decks.

The house edge on this game ranges between 2,7% and 3,1%, depending on the number of decks being used, so it’s not optimal but its definitely far from worst.  Also remember that red dog poker is a fast-paced game that can often reach up to 100 hands per hour, especially when one plays online.

Be mindful of your bankroll and how much funds you plan to bring to the table. Ultimately, bring enough to last you a while or pace yourself by taking your time and intentionally playing a lesser amount of hands per hour.

Like previously mentioned, playing red dog poker online will allow for a variety of stakes, although CA$100+ is considered on the high side of the spectrum. There’re also bonuses to be earned, although since it’s a table game, you will have to wager more than slots to score a bonus (recommended bet is three to ten times that of what slots players have to wager).

So, there you go.  Red dog poker is one of the simplest games you’ll find in any casino, although it’s perhaps not the right choice for those who prefer games of strategy.  But, if you are looking for some fast-paced fun and have the supporting bankroll, then red dog is the hound that’s just up your alley.