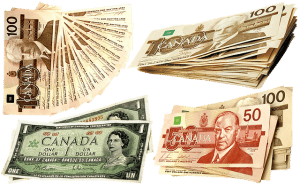 CA$1,000 is the king of banknotes when it comes to Canadian bank bills.  However, they are on their way out, and you might find yourself turned away if you offer one of these as tender on any of your casino payments.

For those of you who manage to locate a CA$1,000 banknote tucked away somewhere around your home, consider yourself lucky.  These rare bills can get you quite a bit at the candy shop, and beyond.

However, you may have recently read that the federal government has changed the status of these banknotes and has pulled them out of regular commerce.  So, where does this leave you as a gambler and are CA$1,000 bills still valid at your local land-based casino?

The first CA$1,000 bills were issued in 1870 by the Dominion of Canada.  Following the establishment of the Bank of Canada in 1934, first notes bearing the name of this institution were issued as valid tender across all Canadian provinces.

The CA$1,000 banknote was withdrawn from circulation by the Bank of Canada on 12 May 2000 at the request of the Royal Canadian Mounted Police (RCMP), as part of a programme to try and reduce the level of crime.  At the time, 2,827,702 of the $1,000 bills were in circulation.  By 2011, fewer than one million were left in circulation, most held by organised crime.

The banknote has become synonymous with the criminal underground due to its versatility when trying to move large sums of money from one point to another.  Due to its high face value, the criminals were able to conceal more significant amounts of illicit cash while moving these from point A to point B.

If you happen to be one of those unsuspecting few that are still in possession of a CA$1,000 bill, you might have a bit of a hard time trying to use it, even at your local casino.  Regretfully, these banknotes are no longer redeemable for commercial purposes.  However, all is not lost!  Your local bank will happily accept this banknote and replace it with lower denominations in circulation, which you can then use as you please.