A Simplified Beginners Guide to the Game of Briscola 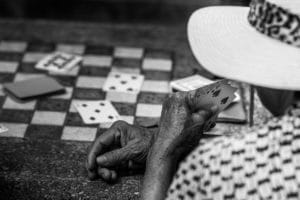 Browse through our beginners guide to the card game of Briscola, an addictive card game that is popular in Italy.

Briscola is one of the most popular card games that originated in Italy.  In Italian cities, you will often see both young and old gathered at street corners or local cafes, enjoying a round or two of this highly addictive game.

How to Play Briscola?

Briscola is played with a traditional Italian 40-card deck, although a standard deck can be used by stripping a few cards from it.  The version of briscola that you play will depend on the number of players taking part in the game.  For two players, the standard version of the game is played, while for three participants, the pack is reduced to 39 cards.

With four players, it is recommended that you play as partners.  Here, each player shares tricks with the person across from them.  Finally, a five-player game is known as the briscola chiamata and is probably the most entertaining of all playing options.

Each player gets dealt three cards, after which the next card is turned over to determine the trumps, or a “briscola suit”.  Gameplay proceeds anticlockwise, with the player seated to the right of the dealer laying out a single card, and everyone else following.  If a trump is played, the highest one will win the trick. Otherwise, it’s the highest card of the suit.

Before proceeding to the next hand, the winner of the trick adds the top card from the deck to their hand, with all other players following suit.  After the deck is exhausted and all the cards had been played, the winner is the player or a partnership that has got the most trick points.

When playing in partnerships, players use sign language to communicate:

How to Play Briscola Chiamata?

Briscola chiamata is a whole different kettle of fish.  In this version of the game, each player gets dealt eight cards, putting the entire deck into the play immediately.  There are also two teams, one of two and another of three players, although the group of three and one of the players from the team of two do not know who else is on their team.

The player sitting on the right of the dealer bids how many points they believe they can score.  Moving anticlockwise, each player can then make a bid or a pass.  The bidding will continue as long as more than one person is refusing the pass.  After this, the player with the highest bid names a briscola card, and whoever holds this card becomes the caller’s partner.

However, none of the other players, including the caller, become aware of this.  This only gets revealed through gameplay, usually when the briscola card is laid down at an opportune moment.  If a caller is brave, they can call one of their cards, secretly taking on all four players at once.

At the end of the game, the holder of the briscola card and the caller combine their scores.  If they have minimum the number of points as the original bid, the holder gets one point, the caller receives two, and all the other players lose a point.  Should they fall short, the team of three each gets a point, the briscola cardholder loses one, and the caller loses two points.   If the caller played alone, they would get four points for succeeding, or lose four points for failing.  The first player to reach 11 points will win.

So, there you go.  Briscola is a nail-biting and highly social card game that can keep up to five players glued to their cards for hours.  We hope that you enjoyed our beginners guide and are confident enough to give this game a shot.