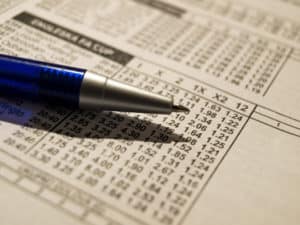 Parlays, or accumulators, are big business for sportsbooks, with an occasional bettor defying the odds and landing themselves with substantial cash prizes.

Accumulator, or parlay bets, consist of wagers that are made up of several selections across different sporting events.  For your bet to win and the parlay to land, all legs must be the winners.

The advantage of parlay betting is that you can score a big prize off small stakes, which makes this type of betting that much more appealing.  Here is the list of the largest parlay wins ever and the lucky winners who scored them:

Las Vegas is the gambling centre of America and has seen some huge wins over the years.  One unnamed MGM bettor staked a massive US$8,500 parlay bet on five NFL teams, during the 2017 season.

He first selected his four favourites – New England Patriots, Kansas City Chiefs, Oakland Raiders and Baltimore Ravens – and then predicted Detroit Lions beating New York Giants in the end.  When all five parlay legs came up, the man increased his US$8,500 to a massive US$250,000, which he can thank his confidence and his football skill predictions.

One anonymous resident of Las Vegas bet on 15 basketball selections in March of 2016, resulting in one of the biggest wins ever in the history of basketball betting.  What made this win even more impressive was that, apart from two selections, none of the others were NBA picks.

In fact, most of the US$5 progressive parlay wager consisted of NCCA college basketball teams.  In the end, all 15 legs came in, resulting in a more than impressive US$305,375 win being scooped up.

Most parlay bettors stick to one sport, but an unnamed punter from Lichfield in the West Midlands decided to include a bouquet of sporting selections in 2000.  In the end, he betted 16 events on the same 30p slip.

Ultimately, the lucky bettor predicted the winners of English football’s top five leagues, the bottom three leagues in Scotland, the rugby union premiership winner, as well as the victor of the cricket Country Championship.

A housewife from the UK, fed up with her son and husband’s obsession with soccer, decided to bet £1 on 12 teams winning in the English Football League 2017 season.  And, her predictions came full circle when all 12 results came off, winning her a massive £574,287.

In 2008, a fertilizer salesman, Fred Craggs, scored an incredible eightfold at the horseraces.  The Yorkshire local placed a 50p parlay bet at his local William Hill betting outlet, in the town of Thirsk.

The bet was struck at a colossal odds of 2 million/1.  In the end, all eight of Craggs’s preferred runners came in.  However, the lucky punter didn’t know that his parlay had come off until he revisited the betting shop branch.   Ultimately, the £1 million prize came in as a perfect 60th birthday gift and one that Craggs will remember forever.

While parlay bets might not be as targeted as single-bet wagers, they offer a great winning potential.  The ability to spreads your bet over several races allows for some pretty sizeable prizes resulting from small stakes. Why not give parlay betting a shot and see where your luck takes you.