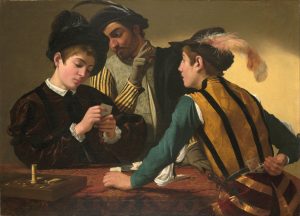 Some say that gambling is as old as time.  And, while we can’t define precisely how old father time is, we know that primitive forms of gambling stretch back to the Old Stone Age.  By 3,000 BC, six-sided dice games were being played in the region of Mesopotamia, while first gambling houses were opening up across China during the first millennium before Christ.

Over its millennia-long illustrious history, gambling has recorded a few well know historical figures who excelled at the art of wagering.  Although these individuals are today better known for the indisputable mark that they left on world history, their love of the dice has followed their reputation to this very day.

Here’s a list of some of history’s most (in)famous gamblers:

While we tend to associate Casanova with his potent exploits between the sheets, the Venetian adventurer was also an avid gambler and risk-taker.  At 21, Casanova embarked on a career of professional gambling. However, he later pulled out this career path due to his inability to control himself and his urges after each of his wins.  Some of Casanova’s favourite games were lotto, basset, piquet and quinze, all of which were popular amongst the upper classes and the aristocracy of the time.

Henry VIII was a revolutionary man in more ways than one.  Although he is best remembered for his six wives and his radical shift from a pious Catholic to the founder of his very own Anglican church, the stocky monarch was also a devotee of the dice.  Henry was regarded as the most skilled gambler in medieval England and never used his royal status as an advantage, often playing against commoners.

Charles II is another colourful English royal with a noteworthy biography.  Unlike his father, Charles I, who was more of a political gambler and whose court intrigues finally led him to lose his crown and his head, Charles II submitted to both the will of the parliament and the delights of court excesses, in the form of gambling and women.  This “merry king of England” made games of luck a focal point of his court, some of which spread to the New World, which was being settled during the time his reign.

The glorious Sun King of France was renowned for his opulent living.  He constructed the megalomaniacally lavish palace of Versailles from where he cemented the authority of his royal regime.  Besides spending a great deal of time in his mistresses’ chambers, Louis also enjoyed winding down with a game of cards.  Such was his passion for gambling that fixed times were set aside each day for the king to try his luck at gambling.  Needless to say, a heap of money from the state coffers was blown on his hobby, contributing to ever-growing budgetary issues.

Another great spender of her time was the wife of Louis XVI, Marie Antoinette.  Although she arrived at the royal court as a timid teenage girl, she soon succumbed to the palace vices and extravagant lifestyle of the courtiers.  It is now certain that Marie Antoinette was a problem gambler and was addicted to excessive wagering, all while the majority of the French population went hungry.  She was called “Madame Deficit” by the disgruntled masses, and her illustrious royal career came to an abrupt end at the foot of the guillotine, when the revolutionary authorities of the newly established French republic sentenced her to death.

John Montagu, the 4th Earl of Sandwich, was an important British statesman of the 18th century.  He held key positions in the government and the military for most of his life, while dedicating his spare time to his passion for card games.  In fact, Montagu was such a passionate gambler that he often didn’t set aside time to eat during his long hours spent around the card table. Accordingly, he would ask his servants to bring him shavings of meat between two slices of bread as a quick snack. Other people, according to this account, began to order “the same as Sandwich!”, and thus the “sandwich” was born.

Dostoevsky is regarded today as one of history’s most influential novelists.  His literary masterpieces, such as Crime and Punishment, The Idiot and The Brothers Karamazov, are viewed today as the epitome of Russian classical prose.  Dostoevsky was also an avid gambler, and it is said that he wrote the last section of Crime and Punishment in a matter of days, just to secure an advance payment from his publisher to pay off his gambling debts.  His novella, The Gambler, depicts Dostoevsky’s own addiction to roulette.

History is peppered with famous and infamous characters, who in one way or another relished in the allure of dice and cards.  Some of these personalities left a lasting mark on the history of their countries and the world. In contrast, their prowess at the wagering table left their names permanently engraved in the annals of gambling history.