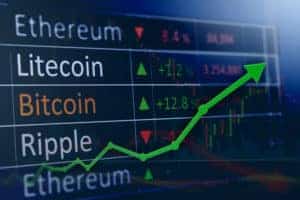 Blockchain technology, a system where individuals and governments have little sway over financial decision-making, is becoming the new reality.  2020 witnessed a large number of businesses adopting cryptocurrencies for their day-to-day transactions.  This was coupled with PayPal, which incorporated Bitcoin into its product range.

Despite all the advancements in cryptocurrency technology, many people still hold reservations about using this form of payment out of safety concerns.  However, due to their immutability and anonymity, cyber currencies are rapidly growing in popularity.

One market segment where anonymity is paramount is the gambling industry.  Every gambler wants to play their favourite casino game, accompanied by the peace of mind that their personal details and money transactions are safeguarded against malicious security breaches.

While Bitcoin has gained a reputation as the most popular cryptocurrency, other digital coins are slowly creeping up across multiple payment sectors.  Here is the list of the top five cryptocurrencies used at online casinos:

Bitcoin gained its fame as the first cryptocurrency launched globally.  It is believed that the entire blockchain idea was designed with Bitcoin in mind, and today over 80 per cent of all digital coin transactions are conducted via Bitcoin, making it the largest cryptocurrency in the world.

Bitcoin saw a significant uptake at casinos, starting from 2018, attributed to more gamblers getting more familiarised with this form of payment. Initially viewed as an exclusive investment tool, a growing number of gamblers are taking up Bitcoins due to their privacy and anonymity.

After Bitcoin, Ethereum is the second most popular digital coin in the world.  Although lower in popularity, Ethereum beats Bitcoin on functionality.  Furthermore, Ethereum has not been embroiled in any significant scandals and is seen by its users as a viable and reliable payment method.

One appealing Ethereum feature is its smart contract, which allows safe deals to be conducted by users.  It doubles up as a medium for holding funds, which is a guarantor of fairness.

Litecoin is often seen as an offshoot of Bitcoin, offering lower usage costs and a higher maximum cap.  However, the main advantage of Litecoin is that it confirms all transactions, and it operates four times faster than Bitcoin, which is critical for online gamblers.

The primary idea behind Litecoin was to create a cryptocurrency that will not require a time-consuming registration.  Whereby Bitcoin requires about ten minutes to register, Litecoin only needs about three minutes for registering.  Furthermore, the fee charged by the processing node is much smaller than with Bitcoin.

Initially, Bitcoin was created with a small-sized node, limiting the number of transactions conducted in a second.  As a response to this, Bitcoin Cash was designed to increase the block size and speed up transactions.

The main differentiator of Bitcoin Cash is that it holds less value than Bitcoin.  While its intrinsic value is much lower than Bitcoin’s, Bitcoin Cash is still a comprehensive digital coin for online gamblers and has become a widely accepted cryptocurrency at casinos.

Monero is another digital coin that thrives on Bitcoin’s offerings, including anonymity of transactions.  All payments are processed in a manner that makes them untraceable with their source. Furthermore, all transactions are conducted through a hi-tech encrypting process that operates under a blockchain network.

An issue with Monero is that it is not listed as a public cryptocurrency and has been taken off several exchanges due to growing concerns of illegal activity.  Additionally, its cryptography is believed to have been cracked by a US firm recently.

There are several additional cryptocurrencies used across various sectors, and their popularisation could mean the advent of additional ones.  Even social medial platforms like Facebook have personal digital currencies in the pipeline.  The benefits of cryptocurrencies are there for all to see, and in many ways, often tend to favour online casinos.