5 Most Famous Horseracing Events from Around the World 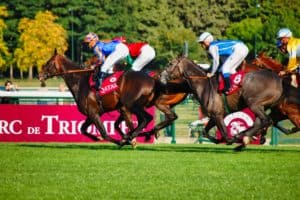 The most famous horseracing events are often largescale spectacles that involve the crème de la crème of equine prowess, drawing in thousands of spectators and a great deal of horse bettors.

Horseracing is all about prestige and glory, where the best horses, jockeys and trainers rub shoulders with one another for the ultimate prize.  Jockeys and horses revel in the competition, while trainers can measure the success of their work and effort that they’ve invested in a horse.

Some famous horse races have traditionally become a regular fixture for the best that the horseracing world has to offer.  Here are the top five not-to-be-missed racecourse events, one of which a true punter should attend at least once.

The Triple Crown is a combination of the three most famous races that take place each year in the US.  The season opener is the Kentucky Derby, which takes place every May, and has a longstanding tradition that goes back to the 19th century.  The month of May also sees the legendary Preakness Stakes, hosted by the renowned Pimlico Racecourse in Maryland.

The trio season finale is the Belmont Stakes that occurs each June in New York.  These three races are also more commonly known as the American Classic Races.  A lucky steed that manages to swoop all three prizes is said to have won a Triple Crown.  This top accolade, however, has only been achieved by very few animals over the last century and a half and is regarded as the holy grail of US horseracing.

The UK triple crown is the oldest type of triple event in the world.  The first of the series was held back in 1853 and provided the inspiration for other types of similar events around the world.  The trio of spectacles are arguably the most famous flat races in the world.

Grabbing the UK Triple Crown represents a great deal of prestige for a horse and a jockey.  This feat is so rare that the last time anyone won it was in 1970, when Nijinsky II crossed all three finish lines, being only the 14th horse ever to achieve this.

Horse racing is big in Australia and races don’t come any bigger there than the Melbourne Cup.  The event has been a staple of the local horseracing calendar since 1861 and is the premier racing event in the country.  In fact, the November event is so big that it is a national holiday in Australia.

Prix de l’Arc de Triomphe is the most renowned horseracing event on the European mainland and takes place each October at the Longchamp Racecourse.  The race has a sizeable prize pool of around US$5 million and has been run every year since 1920, attracting an international audience of millions of viewers.

The Dubai World Cup is one of the new kids on the block when it comes to international horseracing events.  Even so, it has, over a relatively short time, established itself as one of the most important horse races that take place regularly around the world.

One thing that sets the Dubai World Cup apart from the competition is its whopping US12 million prize pool, which ranks it as the richest horse race in the world.   The race is run on a synthetic surface at the Meydan Racecourse and takes place over the course of six consecutive Thursdays each year, that span from late January to late February.

The above five racing events are probably the most famous horseraces in the world, but they are certainly not the only ones.  However, they carry the most prestige for the winners.  And, they remain the ultimate spectacle for those bettors who are looking for a top experience and great betting opportunities.