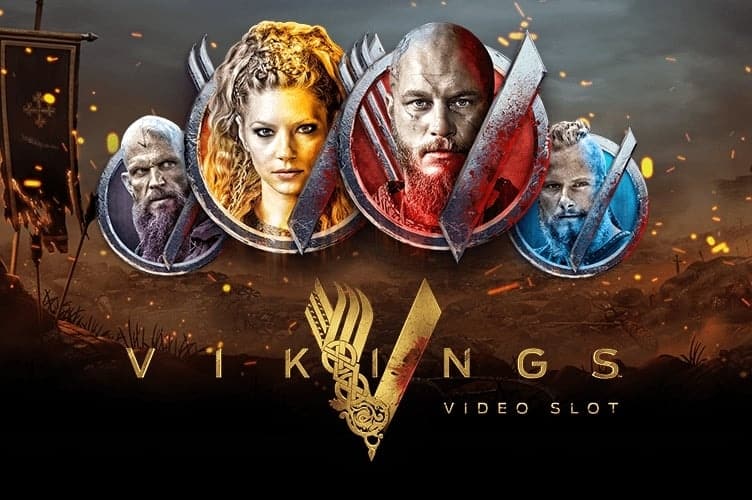 If you are you prepared to “lower yourself in order to pick up your ultimate power”, you will find yourself in the great company of Ragnar Lothbrok. Vikings is a real online video slots game that is powered by NeTent and based on the popular historical drama series that was written by Michael Hirst. Join the brutal battlefield and get ready to conquer for victorious winnings. Vikings is played on 5 reels with 3 paylines and provides the determined player with the rewarding possibilities of the battlefield.

Before  boarding your long ship with your axe and shield you shall have to place your bet, in order to get those reels spinning. For those who wish to spectate these antiquities, simply select the Autospin Function and sample a true taste of many a valiant endeavour.

The golden “V” icon in this game acts as the Wild Symbol.

The low paying symbols in this game are the standard A, K, Q, J and 10.

The Hotspot Feature covers reel 3 in the main gameplay mode. When a fully stacked Viking Symbol lands on the entire Hotspot area, all other Viking Symbols in the play area (that are outside of the Hotspot) will transform. Any one of the 4 symbols with a face is a Viking Symbol.

After transformation, the Viking Symbols are evaluated according to the Scatter Payouts (that are detailed in the paytable, multiplied by the bet level and paid). All Viking Symbols displayed anywhere on the reels are taken into account.

In both the main gameplay and the Free Spins Mode, shield walls appear as a cluster of mystery symbols on random areas on the reels. Once all shield walls have appeared, all wins are evaluated. This feature may only be triggered on a spin where no Hotspot Feature, Raid Spins or other wins are activated. This feature appears in a cluster of either 3 x 2, or 5 x 2 symbols.

The raid icon in this game acts as the Scatter Symbol.3 Or more Scatter Symbols appearing on reels 3, 4 and 5 in the main gameplay mode will trigger the Raid Free Spins. During this feature the game transforms into a 7-reel, 5-r-ow, 78 125 betways playing area. 7 Raid Free Spins are awarded with 3 Hotspots on reels 3, 4 and 5. When a fully stacked Viking Symbol lands in 1 or more of the Hotspot areas, all other Viking Symbols transform

If  2 or 3 fully stacked symbols land in a Hotspot, all other Viking Symbols (inside and outside of the area) will transform into the symbol displayed to the left.

During the Raid Free Spins Feature, winnings that arise after a Hotspot transformation may pay in both Scatter and betway wins. In these instances, the wins will be evaluated separately and then summed together.

The shield wall may also be activated after the payout for a Raid Free Spin is evaluated (in case of a win, or before the completion of the spin – if there are no wins on that spin – but never on a spin when the Hotspot transformation occurs).

During the Raid Free Spins, the shield wall will hold either 4 x 2, 5 x 2 or 5 x 3 symbols (these spins are played at the same bet level and coin value as the spin that activated the feature).

Enjoy playing this action packed video game with Spinland Casino. All new players will receive a Welcome Bonus of CA$3,000, along with 50 Free Spins and will have from over 1,000 games to choose from. Spinlan