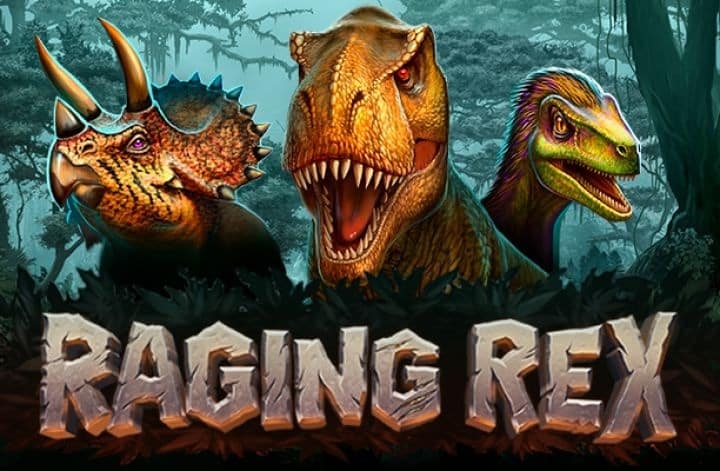 Embark on a journey back in time, to an era prior to man’s existence. Journey if you will, into the world of the dinosaur where your lucky dollar and the Raging Rex hang in the balance for survival. Raging Rex is a real online video slots game that was developed by Playn’Go and is played on 5 reels, with 4096 paylines. If you are partial to monstrous winnings, you have tread onto favoured terrain – win up to 5000 x your bet.

Before the rampage begins, you shall have to place your bet in order to get those reels spinning. For those who prefer to rather spectate the antiquities of the Raging Rex, simply select the Autospin Function and witness havoc on the reels and gain some raging wins. There is a Turbo Spin Function for those who wish to stomp at a faster pace.

If the game round is disrupted, all information and placed bets are stored until the game is re-opened – unfinished rounds may be continued from the point of interruption. Malfunction voids all pays and plays.

The T-Rex icon in this game acts as the Wild Symbol, which  substitutes all other symbols except for the Scatter Symbol.

The four high-paying dinosaur symbols are as follows: the Velociraptor, the Dilophosaurus, the Triceratops and the Parasaurolophus.

The Stacked Raging Rex Wild may land  on reels 2 to 6, which will activate the RAMPAGE Mode (during this feature the Raging Rex becomes sticky and starts trampling his way up the reels. A number of re-spins will be awarded, in accordance with the reels that he lands on; for example, if he lands on the 2nd reel, 1 respin will be awarded and if he lands on the 6th reel, 5 respins will be won. No re-triggers are available.

The meteor sediment icon acts as the Scatter Symbol. 3, 4, 5 Or 6 Scatters Symbols which land anywhere on the reels, will activate the Raging Free Spins Feature (8, 15, 20 or 30 Free Spins are awarded respectively).

The Raging Free Spins Feature ALSO includes two Prehistoric Giga Modes, of which, one must be chosen:

Raging Free Spins may be re-triggered by the appearance of 2, 3, 4 or 5+ Scatter Symbols, whilst 5, 8, 15 or 20 additional spins will be added to the total. Unlimited Free Spins are up for grabs!

Raging Free Spins cannot be activated during the RAMPAGE Mode.

Enjoy playing this roaring dinosaur themed online slots game with Vegas Hero Casino. New players will receive a Welcome Bonus of up to CA$1,000, along with 50 Free Spins with their first deposit. There are over 700 games to be accessed as well as massive ongoing Match Bonuses.