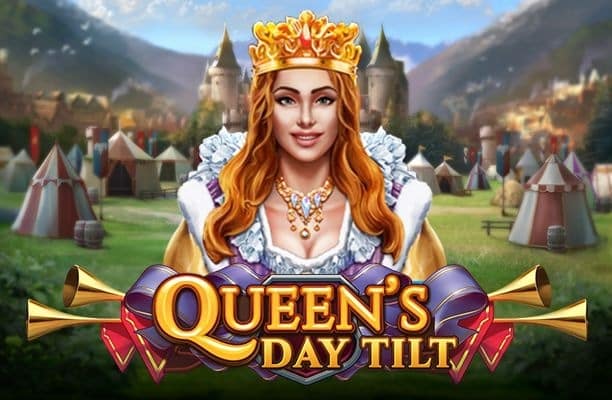 Let the celebrations begin! The Queen and her royal court are to celebrate her reign, taking you back in time to witness many a noble knight in his fight for the Queen’s hand. Queen’s Day Tilt is an online video slots game that is brought to you by Play’n GO and is played on 3 reels, with 1 payline. If you are scouting around for a genuine online Canadian slots game, you are in for a royal celebration with this one.

To join the royal court you shall have to place your bet, in order to get those reels into spinning motion. Spectators may select the Auto Spin Function to witness and enjoy these proceedings. If, however, you are one for speed, you are encouraged to opt for the Turbo Spin Function – may the fortune of the Queen’s favour be yours!

The queen icon represents the Wild Symbol that substitutes all other symbols.

Wild Symbols will be removed if they are the only symbol type remaining on the grid.

The game is played on a new and innovative 3 x 3 grid, which pays gains should the player match 2 or 3 symbols – either horizontally or vertically.

The Queen (Wild Symbol) may exert her royal authority during any non-winning spin, by gifting the gamer with a winning combination, by merely appearing on the grid.

Should the grid be cleared of all but 1 symbol, the Tilt Feature will randomly activate, duly destroying the final symbol and triggering the Queen’s Day Free Spins.

Join the festivities and seize the moment with Queen’s Day Tilt, proudly hosted by Dream Vegas Casino. All newly subscribed players will receive a 200% Match Bonus (of up to CA$2,500) whilst enjoying access to over 1,000 games.