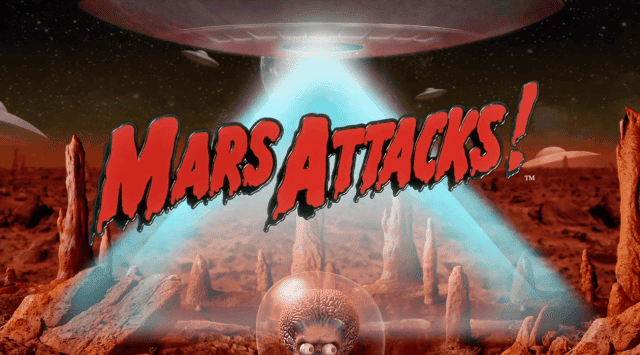 If you are a fan of Tim Burton and his 1996 sci-fi movie Mars Attacks! then you will love this progressive slot game. Defend the universe from the rampaging aliens and get rewarded with immeasurable riches. Mars Attacks is an online progressive classic video slot game, developed by Blueprint Gaming, and is played on 5 reels with 20 paylines.  Before you set out to defend the universe, you will need to place your bet and get the reels spinning.

The first modifier is the radiation blaster.  During this feature, the wild symbol will be placed onto the reels in random positions. The second modifier is the mega shrink ray. The reels will shrink so that 5 symbols appear in each reel. Wins are then paid for any consecutive symbol left to right, regardless of position. The third modifier is the abduction beam. The symbols on the reels will be taken away by the mothership and a new reel set will cascade onto the screen. The fourth modifier is the expansion cannon. A mystery symbol will be placed onto the reels, which will begin to spread to nearby positions. Eventually, all mystery symbols in view will transform into a randomly selected symbol. The fifth feature is the subzero laser.  Winning symbols will be frozen in place and the reels will respin until the win is no longer improved.

The alien icon acts as the bonus symbol. To activate the bonus feature, you will need to trigger 3 or more bonus symbols. You will then be taken to a new screen and prompted to pick a zone from the world map. The selected zone will be invaded by UFOs and awarded 1 of the available bonus rounds. The five zones are Europe, Asia, Africa, Australia and America.

There are five different bonus features that can be triggered during the bonus feature. The first feature is the spy hunter. Here you will get to pick suspects to reveal Martians or humans. Every Martian revealed will award a cash multiplier. Revealing 3 humans will collect the current bonus winnings. Finding the Martian ambassador will award a big money boost to your winnings and end the feature. The second feature is the “we come in peace”. During this feature, the player selects from containers which fill the banks at the sides of the screen. Once a bank has been filled, its value will be awarded in the bonus winnings panel and one of the following will be presented:

The third feature is the DNA analysis. Here you will be taken to a new screen and awarded 5 free spins with expanding DNA wilds active. An overlay of DNA wilds will scroll down the reels as they spin. The DNA wilds will eventually come to a stop. Any position covered by a DNA wild will be considered a wild symbol for that spin. The 4th feature is the Martian takeover. Here you will be taken to a new screen and awarded ten free spins with roaming wilds active. Each spin has a chance to bring in a roaming robot wild on any reel. This fills the entire reel and substitutes all symbols. After each spin, the roaming robot wild will move one reel to the left. The fifth feature is the final stand. Here you will be taken to a new screen and awarded unlimited free spins. On any spin, a special advance symbol can appear on reel 2 for the humans and reel 4 for the Martians. Either or both of these symbols appearing will cause their respective progress bar at the bottom of the screen to fill by a segment. The humans will multiply wins and the Martians will eliminate symbols at specified milestones of the progress bar. The first progress bar to reach the final segment will end the feature.

There are 3 different Mars Attacks jackpot features that can be won during this game. There is the royal pot, the regal pot and the jackpot king pot. You will need to spin the reels to collect crowns. More crowns award a bigger bet multiplier. You will then get to pick from the king’s treasure to increase your prize, following which you will enter the wheel king for huge wins and a chance to hit the progressive pot.