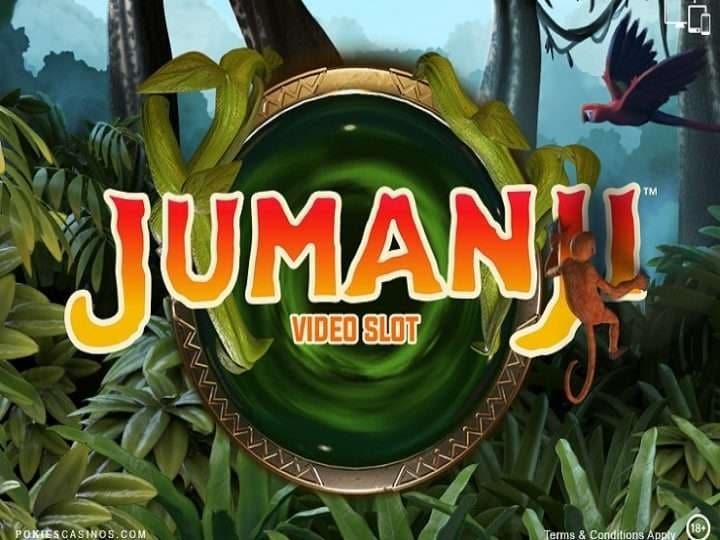 Ready yourself to be transported into a magical world of epical adventure, where many an obstacle lies in wait of your presence. Remember that even though a little rain never hurt anybody, a lot may kill you! Jumanji is a real online video slots game that is based upon Chris Van Allsburg’s famous novel of 1981. This game was proudly developed by NeTent and is played on 5 reels with 36 paylines. If you are up for some serious adventure, this is the portal for you.

To enter the land of Jumanji you will need to first place your bet, in order to get those reels spinning. Should you prefer to sit back, relax and spectate this amazing adventure, simply select the Autospin Function and enjoy the ride. There are 4 exciting features that may be activated during the normal gameplay mode – buckle up for the ride of a lifetime!

The Wild Symbol is depicted by the Wild Logo and substitutes all other symbols, except for the Scatter Symbol.

The Sticky Vines Feature may be activated if there are wins on at least 2 bet lines (9 at most) and no other feature is initiated. This feature awards the player with respins (which increases the winning).

During the Sticky Vines Feature all symbols forming part of a win, as well as all Wild Symbols (from the initial spin) will stick to the reels, allowing the other symbols to spin again. Symbols will spin independently (and simultaneously) on the reels. Respins are awarded until no new winning symbols stick to the vine, OR until the whole game is filled.

When the feature ends the wins will be evaluated and awarded in accordance to the paytable.

Once the Monsoon Wilds Feature is triggered, 1 or 2 reels will be completely covered in Wild Symbols whilst the reels spin. Once the reels have stopped, wins (if any) will be evaluated and awarded in accordance to the paytable.

It is not possible for only the 5th reel to be covered in Wild Symbols.

If the Monkey Mayhem Feature is engaged during the main gameplay mode, potential wins are awarded once the reels have stopped spinning. Thereafter, all symbols are randomly shuffled, creating a guaranteed win (which will then be evaluated and awarded in accordance to the paytable).

During the Wild Stampede Feature, rhinos will stampede across the screen whilst the reels spin, adding 4 – 9 Wilds. Once the reels have stopped spinning, any wins will be evaluated and awarded in accordance to the paytable.

The player shall have to move the token on the board by rolling the two dice. The odds for dice rolls are true:

Individual Free Spin Features are located at each corner of the board game. Should the token land on 1 of the 2 locations in front of such a feature, the respective Free Spins Feature will activate, as follows:

Enjoy this epic slots game adventure that is proudly brought to you by Casoola Casino. All new players will receive a Welcome Gift of CA$1500, plus 200 Free Spins and are spoilt for choice with 1300 super games to choose from.