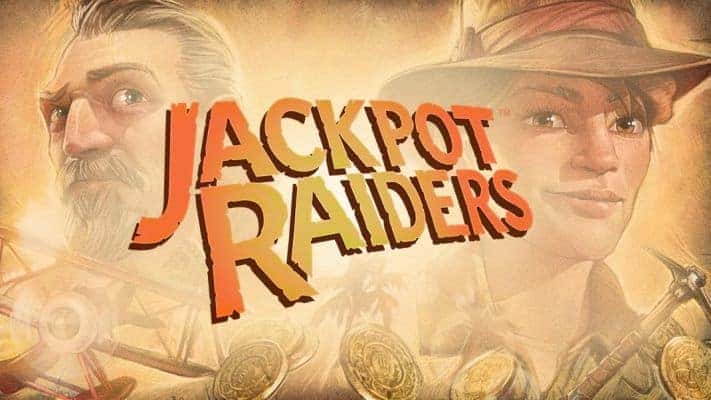 If you are a big fan of the Indian Jones movies, then you will love this video slots game that is inspired by Indy’s treasure hunting adventures. Jackpot Raiders is an online progressive video slots game developed by Yggdrasil Gaming software and is played on 5 reels with 20 paylines. If you are looking for real online progressive video slots games, then this is the perfect place to be. Before you begin your treasure hunt, you will need to place your bet to get the reels spinning. Simply hit the auto spin button, should you wish to sit back, relax and watch the Jackpot Raiders grab those treasures for you.

Jackpot Raiders consists of percentage jackpots that can be won, 4 different ways into free spins and a treasure hunt bonus game. When you start the game, you will be awarded 6 maps.  You will need to collect 5 identical maps to trigger the jackpot free spins.

You can trigger the compass feature by landing 3 or more scatter symbols or via the pick and click chest game feature. When the compass is activated, it will award you with either 10 jackpot free spins or the treasure hunt bonus game feature.

To trigger this feature the player needs to land 2 scatter symbols. 4 potential prizes can be won from the chest:

The 5 different maps are the Summit Shrine, the Highlands Gate, the Jungle Ruins, the Dessert Tomb and the Temple Grave. Each map only appears on its own reel. When a collection is filled, the player will then be awarded 10 jackpot free spins with 1 starting gem towards that reel’s jackpot collection. The awarded free spins are then played with the average coin value of all coin values used when collecting the maps. All new players will receive 2 summit shrine maps, and one of each other map, to start their map collection.

During this feature, all line wins will receive a triple multiplier. There are no scatter or map symbols during this feature game play. A jackpot is awarded when 5 gems of the same colour are collected in a single spin. Gem collections are reset at the end of each free spin session. Jackpot free spins are played with the same lines as in the base game.

During this feature, the player will be awarded 10 free spins by collecting 5 relics found in the treasure hunt bonus game. All line wins receive an x10 multiplier. Start with 1 gem towards each jackpot collection.

Only the compass feature triggers the treasure hunt bonus game feature. When the bonus game is triggered, the player will choose either Sam or Bear as their jackpot raider. Sam raider has a higher potential reward but a lower chance of getting them. Bear raider has a lower potential reward but a higher chance of getting them. Once the player has decided who to go with, they will choose 1 of 3 different paths. There is the safe route, the risky route and the hazardous route. The safe route has a smaller reward but guaranteed success. The riskier routes have higher rewards but are harder to finish.

Try this exciting progressive video slot game with LeoVegas. LeoVegas welcomes players with a great big roar of delight, ensuring that the visit to Leo’s den always turning out to be an impressive experience.  From humble beginnings in 2012, LeoVegas has managed to grow into one of the best online casinos in Canada, with the number of satisfied players vouching for that. LeoVegas is never short of providing you with the latest games that are regularly rolled out, while their casino bonuses keep going from strength to strength.