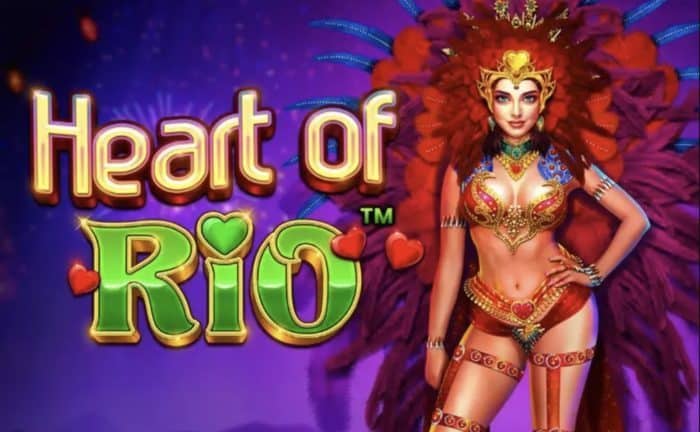 It’s time to celebrate with the joy, colour and pleasure that can only be realized in the heart of Rio. This is where you may frolic with exotic dancers to attain some splendid prizes … of up to 32 x your bet! If you are up for a great gaming experience, come and samba with us today. Heart of Rio is a real online video slots game that is brought to you by Pragmatic Play and is played on 5 reels, with 25 paylines. If you are in the online gaming market and are after an authentic Canadian slot, this is the place for you.

To join in these festivities you need to place your bet – don’t delay in nudging those reels into spinning motion. Spectators are welcome to select the Autoplay Function in order to marvel at the various celebrations. The brisk natured gamer is well catered for and may opt for the Quick Spin Function, for a top-notch experience.

The dancer that is clad in red acts as the Wild Symbol, which substitutes all other symbols, except for the Bonus, Money and Collect Symbols.

The drums represent the Bonus Symbol, which appears on reels 2, 3 and 4.

The Bonus Symbol pays out 1 x the total bet and triggers 8 Free Spins.

The purple disco ball depicts the Money Symbol, which appears on reels 1, 2, 3 and 4.

The Money Symbol takes on a random value from a predefined set on each spin. Should 1 or more Money Symbols emerge on screen whilst the Collect Symbol is apparent on reel 5, the gamer will be awarded with 1 of the following features:

The value of all Money Symbols on the current screen will be summed together and awarded to the player.

The value of the Extra Credit Collect Symbols will be summed with all Money Symbols (on the current screen) and awarded to the gamer.

The value of all Money Symbols on the current screen will be summed by the value of the Multiplier Collect Symbols and awarded to the player.

All reels holding a Money Symbol will be converted into clutters of Money Symbols (of random values). All of those Money Symbols will then be summed up and the rate thereof will be awarded to the gamer.

When the Respin Collect Symbol appears, all Money Symbols on the current screen will lock into position, allowing the remaining cells to respin. This will then reveal a fresh result and then all Money Symbols (on the existing screen) will be summed together and awarded to the player.

In order to trigger the Free Spins Feature, the player is obtain 3 Bonus Symbols on reels 2, 3 and 4.

Money Symbols and Collect Features are also active during the Free Spins Feature.

During this feature the value of all Money Symbols will be accumulated in a Bonus Pot. After the Free Spins are exhausted, the value of the Bonus Pot will be returned to the reels, in the form of a massive Money Symbol on reels 1 – 4, duly re-triggering a final respin.

Should 3 Bonus Symbols land on reels 2, 3 and 4 during the Free Spins Feature, 8 additional Free Spins will be awarded to the player (these spins are unlimited).