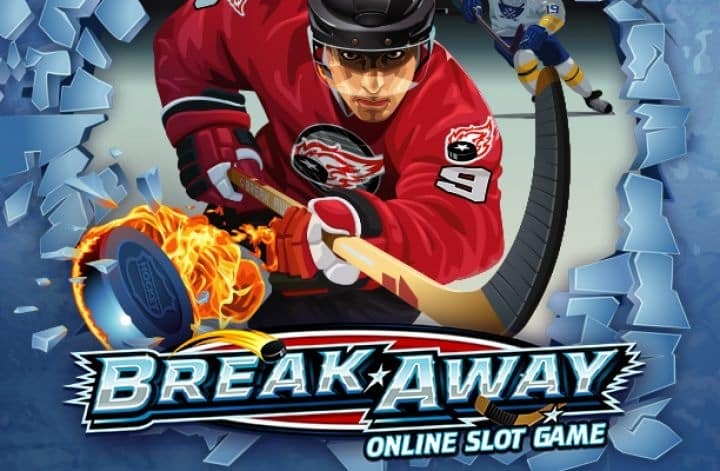 If the ice and the speed are calling your name and you have a dire need to put a stop to that post hugging Goalie, the glory could be yours. Break Away is a real  online video slots game with an Ice-Hockey theme, that was developed by Microgaming and is played on 5 reels, with 243 ways to win. Get ready to smell the rink through your visor as this is the place for you to shower your opponent with one of those super crash stops!

Before tightening up your skates you will need to place your bet, in order to get those reels spinning. Should you prefer to spectate this super game, simply select the Autospin Function, sit back, relax and keep an eye on that scor

The puck (the disk shaped “ball”) acts as the Scatter Symbol. The Scatter Symbol does not need to appear on an enabled  payway in order to solicit a win. The Scatter Symbol cannot be substituted by the Wild Symbol and does not contribute towards the Rolling Reels Feature, during the regular gameplay mode. Scatter Payouts depend on the player’s total bet.

Any win may activate the Rolling Reels Feature, except for Scatter Symbol winnings. Winning combinations are erased from the reels after payouts. If a win results from the shifting symbols, the player will be paid out again. The symbols above the removed symbols will shift position in order to fill the empty spaces (this is a repeated process which increases the player’s chances of winning, without betting on another spin). The Rolling Reels Feature is also available during the Free Spins gameplay mode. Winnings are automatically collected during the feature.

Rolling Reels are available during the Free Spins Feature – the player will be awarded with a Multiplier value for each Rolling Reel during this feature. The Multiplier increases with every consecutive win and the value will be reset to 1, should the shifting symbols not complete a win. Free Spins cannot be re-triggered and winnings are automatically collected during this feature:

* 4 Scatter Symbols awards the player with 20 free games; and

Enjoy playing this Ice-Hockey themed slots game with Jackpot City Casino. This game has a super customer rating.  All new players receive a welcome gift of CA$1,600 and may choose from over 600 games to entertain themselves with. Jackpot City Casino offers a unique online gambling experience and is the proud home of Big Mega Moolah winners.