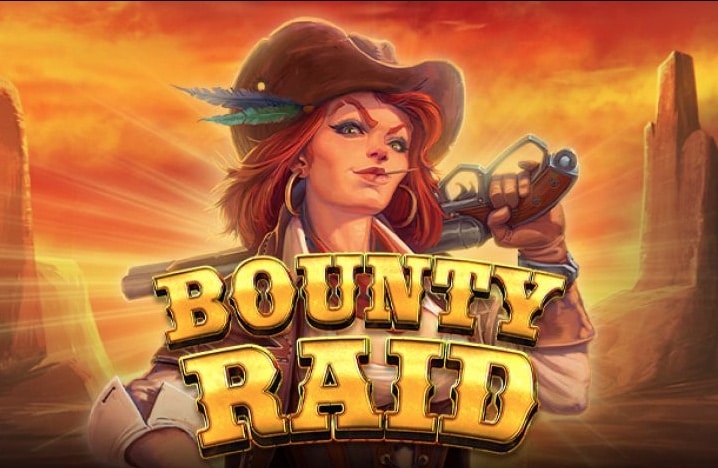 Fancy “bringing the wanted to book” dear Bounty Hunter?  Then dress the part, get into cahoots with the Sheriff and do not let the cause betray you! Bounty Raid was developed by Red Tiger Gaming and is played on 5 reels, with 10 paylines. If you are looking for a real bounty-themed online video slots game, then great reward is within YOUR reach.

Before your mission begins you will need to first place your bet, in order to get those reels spinning. Should you prefer to fulfill a “passive advisory role”, simply select the Autoplay function, sit back, relax and watch the Bounty Hunter enforce that bail. Should proceedings need to be sped up to match your adrenaline levels, engage the Turbo Spin function as there is over 1000 x Reward to be won!

The male cowboy icon acts as the Sheriff in this game. The Sheriff may land on any reel, except for the middle one. The Sheriff will then capture all Bandits on sight in order to reap a combined reward for them. A non-paying Scatter Symbol (that may appear on any reel, except the middle reel) activates all visible Bandits on the slot and these combine as a prize that is awarded to the player. Only one Sheriff will appear at any given time.

The Golden Coin is a Scatter Symbol that only appears in the Respin Feature. When this symbol lands, it increases the prize value of all visible Bandits on the reels.

The prize value from one payline is equal to the total stake, divided by the number of paylines, multiplied by the symbol multiplier advertised in the paytable. Where multiple wins occur on multiple win lines, the total win values are summed together. If more than one win occurs on the same payline, the largest win is paid.

Enjoy playing this bounty-themed online slots game, with an amazing Wild West Canyon background and chilled western music with Casino Joy. All new players will receive a Welcome Bonus of CA$1000, plus 200 Free Spins and have access to over 1000 Games.