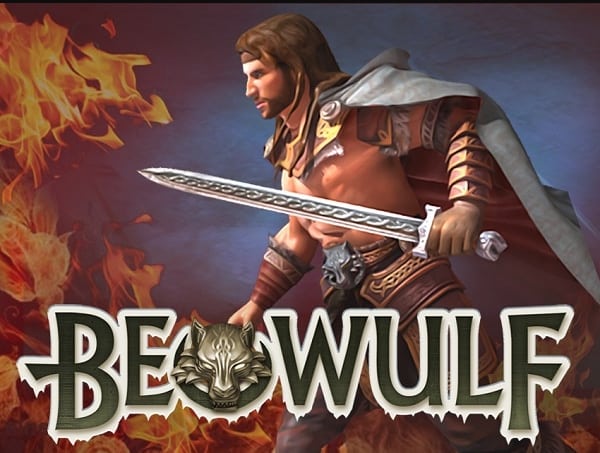 FIGHT FOR WHAT IS RIGHT! Help navigate Beowulf to fiercely avenge Grendel, the very descendant of Cain and his monsters.  Protect the Danes as “fate will unwind as it must”. Your success in this game is as good as gold. Beowulf is an epic online video slots game, developed by Quickspin and is played on 5 reels, with 25 paylines. If real online action slots games are for you, this is the perfect place to be.

Hold up dear warrior, before defending the town from the Grendel monster, you will need to first place your bet, in order to get those reels spinning. Should you prefer to rather morally support Beowulf in his endeavours, simply select the Autoplay function, sit back, relax and watch him save the town. Only the highest win per active line is paid.

The Free Spins Bonus is played with a number of Free Spins determined by the outcome of a fight between Beowulf and the Dragon. For each sword symbols that appears, 1 health decimal is removed from the Dragon’s Health Bar. For each dragon symbol that appears, 1 health decimal is removed from Beowulf’s Health Bar. The Free Spins Dragon Fight Bonus ends when one of the health bars is empty. Additional spins will be given to the player, should Beowulf win the fight.

The Dragon Symbol removes 1 Sword Symbol if there are any on the reels. The Sword Symbol will expand in order to cover the entire reel on which it appears and then, it is removed for the Free Spins that follow. If more than 1 Sword Symbol is held on the reels, the one to be removed will be the first one that appeared. The Dragon Symbol is a Wild Symbol, which replaces all others, except for the Sword Wild Symbol and the Free Spin Scatter.

Enjoy playing this action-packed video slots game with Johnny Jackpot Casino.  New players will receive a welcome bonus of up to CA$1,000, plus 100 Bonus Spins and will have from over 1,500 games to choose from.