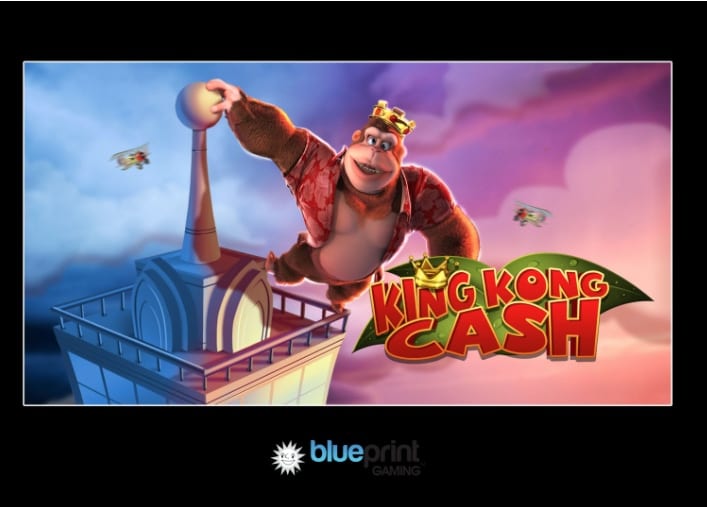 Before you begin grabbing vines to swing towards the jackpots, you will need to place your bets and get the reels spinning. If you wish to sit back, relax and watch King Kong do the work, simply hit the autoplay function.

The wild symbol can be used to help form line wins by substituting for other symbols. The wild symbol cannot substitute for scatter symbols or bonus symbols. Only the highest paying win on each line is paid. Wild symbols include Banana Cannon Wilds, Empire Spin Roaming Wilds, and standard wilds.

If Kong wakes from his slumber during the game, there is a chance the Sleepy Kong Bonus will be triggered. Kong will then leap from his throne and award one of the following features:

Banana Cannon Wilds – While the reels are spinning, Kong jumps from his throne with a banana cannon and fires a sticky banana bomb at the centre reel position, which then explodes, turning additional position wilds. After each win, Kong occasionally jumps up and smashes the ground, causing the reels to respin while holding any wilds in position.

Golden Barrel Super Spin – While the reels are spinning, Kong will awaken from his slumber and throw a Golden Barrel at the centre of the reels. This causes an explosion that adds several Golden Barrels to the reels. Once the reels have landed, all the golden barrels explode and reveal the same symbol.

King Kong Spin Streak – Once the reels stop and present a combination of winning symbols, Kong occasionally jumps up from his throne and begins beating the reels with a wooden mallet. This will cause the reels to respin, holding the trigger symbols in position. This continues until the win is not improved.

Bonus Boost – Similar to the Golden Barrel Super Spin, but rather than adding several Golden Barrels to the reels, the explosion will add a number of additional bonus symbols. This significantly increases the chance of triggering a bonus on that spin.

The King Kong icon acts as the bonus symbol. The player enters the bonus by getting 3 or more bonus symbols anywhere in view. There is no payout awarded directly for getting this; just entry to one of the bonus rounds.

There will be 5 unique bonuses which will be determined by the King Kong Bonus The player will spin the wheel, which will stop on one of 5 features, revealing the bonus that has been awarded.

After a short transition, several barrels will appear on the screen along with a win-plan to the left.

The player selects barrels to reveal an item. Each item will match up to a total bet multiplier, which is paid for matching 3 of the same items. Additionally, revealing a special icon will upgrade the total bet multipliers, and collecting 3 golden monkeys awards the King Kong Cash BIG MON(K)EY Bonus.

After a short screen transition, the player is presented with a secondary bonus screen that is based on the retro-style platform game.

The bonus is split into two stages; Stage 1 is a multiplier trail up the levels to the King Kong Cash BIG MON(K)EY Bonus (stage 2).

The player always begins with stage 1 and is required to select barrels to advance along the trail, increasing the total bet multiplier. Selecting the barrels will reveal one of the following positive or negative outcomes:

If the King Kong Cash BIG MON(K)EY Bonus end game is reached, the player is presented with Kong in the centre of the screen, surrounded by a carousel of barrels along with bananas down the left and right sides of the screen.

Triggered by landing on the Empire Free Spins segment of the wheel during the King Kong Bonus. A screen transition will occur, and the player will be taken to a new destination, the top of the Empire State Building with multiple reels in view. The screen will start at the top before the screen pans down the other reel sets, which display the reels, and a side banner detailing the upgrade for that reel set.

Free spins continue until all spins are used up, where the player is awarded the amount displayed in bonus winnings. Additional free spins are awarded each time the player completes a level.

Triggered by landing on the Golden Kong Free Spins segment of the wheel during the King Kong Bonus. Golden Kong Free Spins are played out on a 5×4 reel format with 40 win lines and a fixed amount of free spins. After each spin, if any special wild symbols land in view, a wild bank panel situated on the right-hand side of the screen will be incremented by the corresponding number of wilds. Once the initial round of free spins ends, the player will be awarded a series of wild spins. Wild spins play out on the same reel set, and during each spin, the accumulated number of wilds is placed randomly onto the reels. After a spin ends, the player is presented with 3 barrels over the top of the reels and prompted to select a barrel revealing either a Golden Donkey (spins the reels again with the wilds shuffled to new positions) or a bomb, which ends the feature.

Have fun playing this exciting Blueprint Gaming progressive video slots game with Captain Spins. Enjoy up to CA$1,200 welcome bonus, 260 bonus spins and over 1,500 games to choose from, with an excellent payout rate of 96.81%