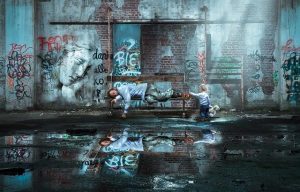 An elderly Oklahoma woman was sentenced to over 17 years in a US federal prison for murdering her toddler grandson by leaving him in an overheated car while she spent hours at a casino.

Alanna Jean Orr, a 50-year-old grandmother from Oklahoma City, Oklahoma, is set to serve at least 17 years in a federal jail, after pleading guilty to second-degree murder of her young grandson.

On 21 June 2018, Orr drove 40km with her grandson to Kickapoo Casino in Harrah, Oklahoma.  According to security footage, Orr entered the casino at 13h23 and departed at 19h28.  Throughout this time, Orr’s five-year-old grandson, Maddox Durbin, remained in the car, as the outside temperatures soared to over 30°C.  The vehicle was left without any ventilation or air-conditioning turned on.

Shortly after she left the casino, Orr contacted 911 and said that her grandson stopped breathing and had choked to death.  Upon arriving at the scene, the paramedics could only declare the child dead, with rigor mortis having already set in.

Both Orr and Durbin are ethnic Kickapoos of Oklahoma, and the murder took place on the tribal trust land, on which the tribe operates the casino.  In addition to her 17-year sentence, Orr will be under three years of supervision and will be required to partake in a problem gaming treatment programme, following her release.

Additionally, Orr will never be allowed to gamble again, either online or at a land-based casino.  On top of this, she will be required to pay a penalty fee of US$3,800 to the Oklahoma Crime Victims Compensation Board for the reimbursement of all the funeral expenses.

It is not uncommon for the casino employees to spot children abandoned in cars while their family members gamble, although only a few fatalities have been recorded.

In January, a Houston, Texas couple was charged with abandonment, after they left their one-and-a-half-year-old child in a running car, at a gas station, while they played slots nearby.  The vehicle ended up being stolen with the child inside, although the toddler was fortunately later located at a playground nearly 30km away.

In August 2019, three people were charged with abandonment in Louisiana, after they left a two-year-old boy in a car in front of a truck stop casino.  The boy ended up wandering close to oncoming traffic, before being spotted by a casino employee and reunited with his guardians.  They then returned him to the car and went back to the casino.

Several casinos display signs across their gaming floors reminding guests not to leave children unattended in vehicles, hotels, or areas within casinos or resorts.  Nonetheless, it remains our responsibility to stay alert and report any cases of child abandonment to the authorities immediately.