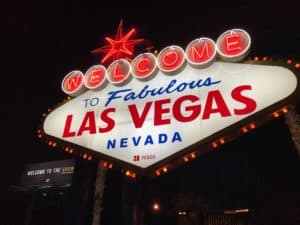 Even though all Las Vegas casinos have reopened their doors in June, following a three-month hiatus, the gambling floors continue to remain deserted as punters elect to stay on the safe side.

The Las Vegas Convention and Visitors Authority (LVCVA) has reported that the June year-on-year visitor numbers have plunged by a record 70% in June alone.  Furthermore, no business travel had been recorded during the same month.

Overall, the first half of 2020 saw a decrease in Las Vegas numbers by 54%, with over 11 million visitors fewer than during the same period last year.  And, things don’t look particularly rosy, with all major conventions planned for this year either being postponed or cancelled.

So far, the month of May has seen the most dramatic plunge in visitor volumes, recording a staggering 96% drop, or a mere 151,300 visitors.  In a desperate attempt to lure more gamblers, most casinos along the Strip have implemented various incentive drives, such as discounted hotel rooms and suspension of resort fees.

MGM Resorts Group, which operates a large number of Las Vegas casinos, has launched a Viva Las Office campaign to attract those people who have been stuck working from home but need a change of scenery.  The programme offers late checkouts, beverage and food credits, as well as vouchers to fly privately on JSX.

Wynn Resorts also announced an attractive luxury hotel deal of a weekend buy one – get one free offer.  Room rates at the hotel start at around US$150 a night on the weekends, and all who book a room will receive the second night free of charge.

The Las Vegas Convention and Visitors Authority has received criticism over the past number of years for what many believe to be an excessive operating budget.  According to critics, the main sticking point remains that Las Vegas sells itself and doesn’t require any additional promotion.

The recent COVID-19 pandemic has allowed LVCVA to prove all of its naysayers wrong, even though the path ahead remains rocky.  In June, LVCVA extended its longstanding advertising and marketing contract with R&R Partners for another year.

Nonetheless, the contract was up for bidding, but the onset of the pandemic made the existing contractual extension a safer bet.  A US$110 million budget was given to R&R to produce and develop marketing spots nationally, as well as secure media buys.