The Incredible History Of Gambling In Canada 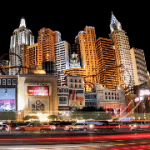 Gambling in Canada stretches as far back as the pre-Columbian period and the arrival of the European settlers in the new world.  The earliest records indicate that cultures from around the world made use of a system through which the wagering of material or financial assets could bring a possibility of winnings.  Often, gambling was seen by the state as a harmless pastime, while in other instances it was outlawed by legislation and carried the risk of a criminal sanction or even corporal punishment.

The native peoples of the Pacific Northwest Coast of Canada played a game called slahal as early as the time of the last ice age.  The game was categorised as a bloodless war game, where one group of men would be pitched against another in a duel of skill and luck.

The game made use of shinbones of a deer, with each team getting a chance to conceal either a stripped or an unstripped bone and the other side having to guess which one is hidden.  The winning team would take the correctly guessed bone, and the game would continue until either side runs out first of its set of ten scoring sticks.

Although this game was played for entertainment and was considered by the players as a source of economic gain, it was also closely intertwined with mystical and ceremonial beliefs.  The game would be accompanied by drumming and singing, which would boost team morale and summon luck upon the players.

The European Connection and Its Influence on Gambling

When the Italian explorer John Cabot first landed on the coast of eastern Canada in 1497, he was not unfamiliar with gambling.  Gambling had flourished in Europe for close to two millennia, with the famous Greek tragedian Sophocles first making observations of dice games as early as 500BC.  Gambling was wholly frowned upon during the hegemony of the Roman Empire, although following its fall and the subsequent period of Dark Ages in Europe, the lack of centralised political structures allowed for individual gambling to flourish.

Cabot, who was commissioned by the English crown to go forth and chart new American lands on behalf of Henry VII of England, knew about the love-hate relationship that the English had with gambling.  At one stage the gambling scourge got so out of hand, that king Richard III, a contemporary of Cabot, threatened any soldier who practised betting with the punishment of death, due to the eroding morale that wagering had on the standing army.  In the end, Richard III lost his head to Henry VII at the Battle of Bosworth Field.  It’s hard to say whether this hammering was due to Richard’s dice-loving army or simply an overall lack of strategy and numbers.  Nonetheless, his successor was all the wiser when he maintained this gambling prohibition during his subsequent reign.

The Amalgamation of Gambling Norms in the New World

It was the unfavourable view that both English and French had on gambling that formulated the way it would be viewed in the territories that today make up Canada.  For a very long time, English possessions in Canada were subjected to the English Statute of the Realm that was published in 1495 and which stated:

“…that no man play at dice, cards, tables, closh, handout, nor at none other game whereby they shall waste their money or cause debates to arise by the same. And if any so be found playing at any of these games that for the first time he or they shall be committed to ward, there to remain eight days and to lose all such money as they or any of them play for; be one half to the provost of that marshal, and the other half to him that so findith them playing.”

The New France colonies followed French law and were also not spared the ban. There, a 1377 law prohibited gambling with cards. Laws were later amended in 1399 to forbid working-class citizens from gambling with cards on working days.

The Legalisation and the New Ban

A breakthrough for English possessions in Canada came in 1660 when Charles II of England lifted the ban on gambling for all citizens.  This meant that all English territories in the New World could successively legalise betting too.  This idyll lasted for over two centuries.  However, with the confederation of Canadian provinces in 1867, the new government embarked on a plan to de-anglicise the Canadian legal system. With the enactment of the new Criminal Code in 1892, gambling was once again seen as a criminal offence.  The exceptions to this rule were charitable lotteries, carnival games of chance and horseracing.

When it was announced in 1970 that Montreal was to be the host city of the 1974 Summer Olympic Games, the nation was ecstatic.  It seemed like an excellent opportunity for the country to unite and showcase everything that Canada has to offer.  The only dilemma was the apparent lack of funds to host such a spectacle.  So, with the insistence of the Quebecois delegates, a forward-looking campaign was launched to fund the games through the newly launched Montreal Olympic Lottery.

The stage was set for the relaxation of gambling laws, and all this seemed to be for a good cause.  Ultimately, as the momentum took off, the process was irreversible.  By 1989, Crystal Casino, the first permanent casino in Canada, opened its doors in Winnipeg.  Quebec and Ontario followed shortly after that, and by the tun of the century, brick-and-mortar casinos were becoming commonplace throughout the country.

When the online gambling phenomenon hit the stage in the mid-1990s, Canadian authorities were left in a dilemma.  The central government could do little as each province had its own lawful gambling interpretations for legal online casinos in Canada.  As the online gambling servers were located outside Canada, the local authorities had no say whether they could or could not accept Canadian players.  The impasse regarding this grey area unfolded when British Columbia broke the mould and became one of the first governments in the world to legalise certain forms of online gambling.  As a result, any internet-based version of a gambling game could be qualified as a lottery scheme and launched freely.  In 2010, Quebec launched its online gambling website, becoming the second regulated online casino on the continent.

Future of gambling in Canada

The main challenge for gambling and online gambling in Canada is the elimination of legal and legislative gaps that might create ambiguity.  Shady iGaming providers have been seen trying to penetrate the market, with concerns over money laundering, criminal cahooting and terror financing rearing their ugly heads.  Ultimately, new legislation can be expected soon, not to limit player options, but to protect the players from unscrupulous providers at large.